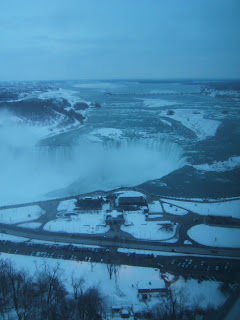 I had such a great weekend it made me question who’s birthday it really was.

I got into Toronto Friday night and was still feeling pretty ill from the week I had so we ended up staying in. Saturday night Erin had a bunch of friends over before heading out to a bar. We drank a little too much and ended up sleeping till 1:00 which was too bad as I had booked us into a kickass hotel in Niagara falls. I surprised Erin with that and tickets to see Jim Gaffigan in Buffalo. He is a very funny comedian that we both like and can be seen here in an ad that was aired during the Superbowl:

We got into Niagara falls with just enough time to hit the liquor store before it closed. We checked into the hotel and were able to get upgraded to the JR. presidential suite for cheap. The room was awesome. It was bigger than my house. It had 2 rooms, a large Jacuzzi, a fireplace, and an amazing view of the falls. Conveniently there was a Keg located on the 9th floor so we gorged ourselves there before heading to Buffalo for the show. 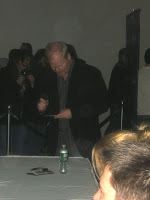 In true Erin/Shaun fashion, we raced to Buffalo arriving as the show was supposed to start. We made a mad dash through deep snow searching the University at Buffalo grounds for the theater. We passed a few people doing the same thing so luckily we weren’t the only ones and therefore the show started a bit late.

After a very funny set we could have waited in line to get a picture with Jim but decided to head back the hotel room for some drinks by the fire. The room was too good to waste.

Around 2:00 in the morning we stumbled out of the hotel and down the street to the casino. We ended up playing blackjack for a few hours and did quite well. We made enough to cover our pricey dinner so that was great and a lot of fun. 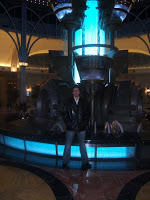 The next day we slowly and sadly left the hotel and headed back to the city. Not wanting to fall asleep at Erin’s place, we headed down to Kensigton Market. They have a lot of cool stores there which we toured before they closed. We then made our way to a statue of Al Waxmen, the King of Kensington. I still have no idea who he is but my roommate Mike goes on about him. Creepy statue.

Erin made a cottage roll for dinner and it was very tasty. I was skeptical as she boiled this huge hunk of meat but it turned out really good…which I was eating some right now.

A short sleep and I was off to the airport. It was a great weekend.