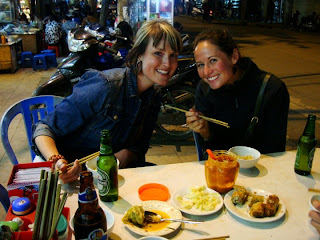 Ironically we arrived back in Hanoi with time to catch our original flight to HCMC. Wanting to give Hanoi a second chance we opted to stay and catch our second nonrefundable flight the next day.

After finishing off the twice paid vodka from Ha Long Bay we headed out to take in the Old Quarters. We attempted to get some culture by seeing a water puppet show however they were sold out for the evening. Disappointed as water puppets are unique to northern Vietnam, we decided to try our luck closer to when the show started. With a couple hours to kill we strolled a market area that resembled and sold the same stuff as every other market we had been to in Vietnam. I tried and failed to buy a pair of flip flops. The sales lady was adamant that I try their largest size. I humored them. Clearly size 11 does not equal size 11 in North America. 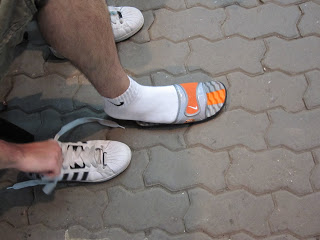 We ate some street meet and had curb side beer then headed back to the theater. Right before the curtain rose we were able to get 4 seats in the 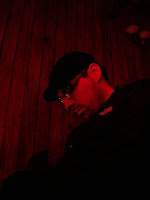 second row. The show was really neat. A live band played and did the voices as the puppets danced and swam in front of us. The water is a murky green color to hide the mechanics behind the puppets and to resemble the antifreeze colored Hoan Kiem lake where the puppet story takes place. The puppets reenacted the legend of the lake which consisted of a magical sword and a turtle. Naturally I fell asleep halfway through…not because the show was boring. Nay. Vietnamese folk music always makes me sleepy…and perhaps a sign that 30 is not far off. 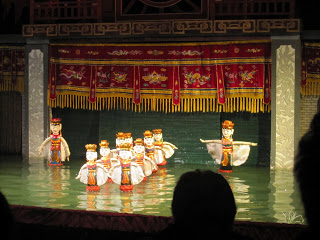 Not wanting to leave Vietnam without taking a rickshaw ride, we rode around Hoan Kiem lake after the show. Check. 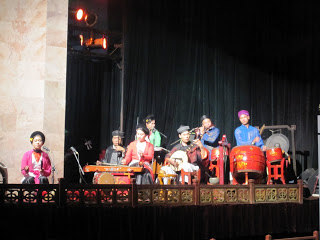 The french influence finally paid off for us when we had the best breakfast of our trip at a small bakery. A 45 minute taxi ride to the Hanoid airport followed. There we said our goodbye’s to Jallision as they were off to Kuala Lumpur for a connection to Tokyo. We would not see them again for 17+ hours. Worst connection ever. Our connection was a short one hour flight back to HCMC. When we went to check in we found our Jetstar flight had been canceled. Awesome. At that point it was just comical. There were several flights on Vietnam Airlines a day that would get us in on time. Slight panic set in when we found out all other flights that day were sold out. We put our names on a standby list and waited 20 names deep. It was slightly less funny but still funny enough to keep Erin from calling her mom to come get her. Miraculously our names were called and for twice what we originally paid we were on the plane and laughing about what had just happened. The laughter was short lived as an hour and a half later my bank card was eaten by a HCMC airport ATM machine. I nervously laughed about it until banks call center asked me to stay in HCMC for another 2 days so they could recover my card. Angry Shaun had arrived in Vietnam. Hanoid. It wasn’t just the bank card. It was a combination of our romantic night in in Ha Long Bay, my new cameras untimely death, our flights cancellation and the additional costs of the new flight. The bank card was the breaking point. On top of that my other bank card, my backup account, was not working either. Heading to an expensive country like Japan didn’t help. Nevertheless we decided to make the most of our last few hours in Vietnam and headed into town where we bought silly motor bike helmets and had our last cheap foot rubs to relive the Hanoid tension.

Written By
Shaun Robertson
More from Shaun Robertson
When my Instagram account started picking up steam I caught some flack. Not because...
Read More