After working 12 – 15 hour days in Calgary for a week I returned home tired and
exhausted only to turn around and head right back to cowtown. The Calgary Stampede was on and Erin wanted to see what all the fuss was about. Sticking to my manifesto for a better Shaun (take in what Alberta has to offer) I obliged and made the 3 hour trip for the second time that day.

Earlier in the week I witnessed first hand how bat shit crazy Calgarians go for the Stampede. The entire city literally shuts down. Driving around town I saw numerous tents and stages setup in different parking lots. Every company throws BB Q’s, parties, and free breakfasts for their employees. A lot of these events are even open to the public. There is even a website (www.flapjackfinder.com) dedicated to these free breakfasts. One of these free breakfasts was held in the hotel parking lot where myself and a co-worker were staying. Being one who likes free stuff and loves pancakes I decided to check it out. 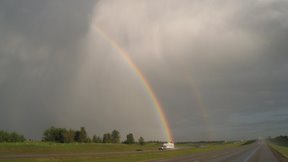 The following is a transcript between myself and my coworker whom was staying on the opposite side of the hotel:

Me: Nice.
Me: P.S. I just got up
Coworker: They are lined up like cattle. Coming from everywhere!

I looked out the window and was frightened by the site. The empty field that my room overlooked was scattered with people of all types coming form all directions. Some even had their own plates and cutlery. 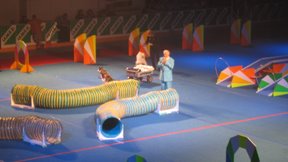 None the less we got ready and headed down. The line up wasn’t as bad as we thought, mainly because the set up kept the cattle moving.

Fast forward a couple days and Erin and I were on our way to packing our face with all sorts of Carnie foods. But first, the first “full” rainbow I have ever seen: 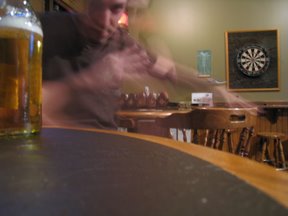 The picture really doesn’t do it justice. This rainbow streached across the entire mid-Alberta sky.

We stayed with Erin’s friends Scott and Whitney in their very nice new home. The majority of time was spent playing Wii Mario cart however we did make it down to the stamped grounds as planned. First impression was that it resembled Edmonton’s Klondike days (now sadly named Capital Ex) only cleaner and with less trash. Take it as you will. Sadly we didn’t take in any bull riding or rodeo clowns but we did see some world class dog racing. Super dogs is a staple at the the stamped. The host has been doing it for over 30 years and the dogs put on a hell of a show. Other than the host, highlights of the show included an incredible Frisbee catching dog and a chubby bull dog named Pot roast who barreled his way through the course. 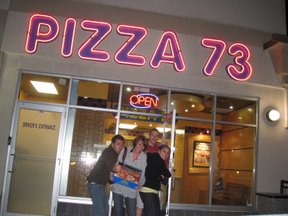 After the dog show we feasted on carnival food. I hadn’t eaten much that day and was carefully planning out my meals to maximize eating pleasure. Corn dogs, mini donuts, pizza on a stick deep fried Twinkies and deep fried coke (thats right) were all on the menu. Sadly a corn dog and a poor discison on super sizing to the bucket-o-mini donuts, and I was done.

A night of darts, jager bombs, more Wii and Pizza 73 followed by a hang over day that included “The never ending story” (1 and 2) and we were off. It may not have been cowboy hats and bull riding but we definitely got a taste of the Stamped.

>Next up, Erin’s Ma comes to visit.