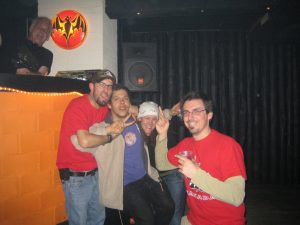 Foggy Interlaken
Interlaken is an expensive place. So what did Jon and I do? Stay four nights and drink. It was pretty quite at the hostel and ended up hanging out with some off the staff. They gave us a deal on a room with a bathroom so it was hard not to stay. The bar tender was a rocker originally from New York. I broke out the travel guitar and we jammed a little.

Not all Americans we met there were that cool. We met one couple form Florida who basically summed up the stereotypes of pro Bush Americans. Jon and I were on our way to bed when we met this guy. He was pure entertainment so we stayed up to listen to his stories of beating wildlife with baseball bats and argue about his geography comments. He claimed that the pacific ocean was on the west of Florida and the Atlantic on the east. His girlfriend went on about shooting automatic rifles at a family run shooting club. Awesome.

To be fair, only 3 of the numerous Americans we have met have been like that. The same night we met this couple there was a sweet school teacher from San Francisco. She had been arguing earlier that night with the couple about politics. I stayed clear of that when he came to me with his thoughts.

We did not waste all our time in the pubs. We got up the mountains to go sledding which is quite big there. It was a lot of fun once we got a hang of the crappy sleighs we rented. Nobody else on the hill had the same sleds. They were basically the hardest plastic available with 2 skies attached. I think the rent shop was having a laugh on us. Still fun though, even with people flying by us a cornering with little effort. 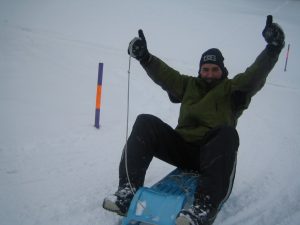 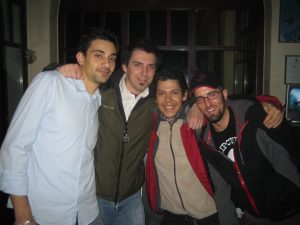