The next morning we ate at large Marge’s dinner (strictly based on the name) in the beautiful town of Lunenburg. After a breakfast of fish cakes we were off for a quick tour of the town. The biggest attraction is the Blue Nose II…it wasn’t there.

Note: definitely not the Blue Nose

We headed down the road towards Peggy’s Cove to where we were going to camp for the following 2 days when I started to feel ill. I was really hoping it was not from the fish cake’s or scallop sub as I was trying to get my aunt and uncle to try new things. Thankfully it was only strep throat…for the 3rd time this tour. Phewww. I felt bad for filling a day trying to get some meds but once I did I felt great. 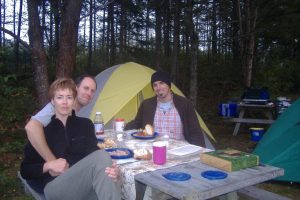 Dristan, oddly enough, is amazing stuff. I was not feeling like camping but we had no choice because Halifax was hosting a couple NHL games as well as the Rolling stones. There was not a motel, hotel, or boatel for miles and miles. Thankfully I went from felling like complete crap to being on top of the world within about an hour. I did not want any bug to ruin my time.

Camping turned out awesome, so much fun. My aunt and uncle don’t mess around. We had a great meal then headed out to try and catch sunset at Peggy’s Cove which Alison dubs “the” post card place in Nova Scotia. Although we missed sunset, we got some great dusk pictures and really, really enjoyed the huge crashing waves. It was surprisingly mesmerizing and was great to enjoy it tourist free.

The day in Halifax went from miserable to great. Stay positive kids.