The lists – My Europe Backpacking Favorites

Ok, so even before getting back home I have been bombarded with typical questions about the trip. Because of this, I have compiled a few lists of the questions.

Please Note: The following are based on my own personal opinions, and experiences. What I think is tip top may not be for everyone…although I do have great tastes…

Hostels make the experience of a city or town. TO me it’s very important to have a great common area or bar where backpackers can meet and socialize. Cleanliness is also a factor as is a friendly, helpful, staff. Here are my top choices from where I have been: 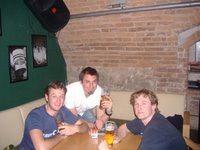 This hostel is great. It has a large and very cool bar in the basement. They have organized events like trivia night, (which we won two beers each as a team) a home theater, and live music. There is even daily cheap bbq’s prepared by a real Australian so you know its done right. Finally, upstairs the dorms are immaculate with huge lockers, comfortable beds, and spotless bathrooms. If you’re going to Europe, go to Krakow. If you go to Krakow, stay at this hostel.

Not the cleanest or newest hostel around but it wins my vote for friendly (and hot) staff, organized events, free internet with enough computers to go around, and a 24hr bar. The staff makes sure you have a good time as they take groups out nightly as well as organizing bobsledding and ak-47 outings. The 24hr bar was key for me as a great group of us watched the Oilers down the Ducks in the playoffs.

Again, not the newest or cleanest but has tons of soul and character. The hostel is located with in the old city walls and the upstairs dorms are very cabin like. The staff is great and its got an awesome bar/restaurant. We partied there nightly with the staff, until way past after closing, and had a great time singing and playing guitar. The food is yummy and they serve real breakfasts. There is also organized rafting trips and if that’s not enough, free keg of beer on Wednesday nights!

(picture of “The Tats” playing on the hostel’s patio) 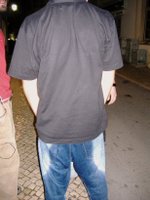 I was skeptical at first as my guide book tended to cater to gays but when we arrived we found it was anything but. Run by two brothers whose motto is “Its our business doing pleasure to you,” they make sure you have a good time. There mother is also on staff and is very sweet. She even cooled some portages meals a couple nights. Throw a great small social area, clean comfortable rooms, beer pong, and a great restaurant and you have mine and Jon’s favorite hostel.

(picture of “Pee Pants,” one of the staff at Rising Cock. He knows how to have fun.)

Surprisingly there was little to no dirty hostels. Before we left Jon warned me that there was no hot water in Europe. In 5 months I think I had 2 cold showers. Never-the-less, there were some bad places; one in particular should be avoided at all costs.

Many people would be surprised to see this on a worst hostel list. It is in fact very clean with a ton of activities but I feel its over rated and over priced. Add to it that I spent 3 nights extra because I had strep throat, and over half the staff quite while we were there (bad managers) it makes for a bad experience. If your young and looking for fun it’s a good stop but only for a couple days. Weekends are a good bet as they throw one hell of a toga party.

(picture from the Toga party. Just love the expressions!)

Another very clean, large hotel-like hostel that is very new and nice, but has no character. The bar/common room is huge and uninviting and the staff was pretty dense. We had to move beds twice whole in the same room. Still not sure why the people checking in could not be put in the empty beds.

This was the cleanest and newest hostel we stayed in. It has very comfortable beds, gorgeous bathrooms, a great common area and a kick ass roof terrace. Then why is it on the shit list you say? The staff. I had paid for 3 nights accommodations. 2 nights into my stay I decided last minute to pack up and meet up with friends who were driving to Morocco. I asked if I could get money back and they said if someone filled the bed. Understandable. 2 seconds later a girl showed up looking for a bed. Perfect. I was in a huge hurry so I asked them to give the money to Jon, who was staying another night. No problem. Turned out that the girl left the next morning without paying and the staff decided after a long argument with Jon, that I should pay for there screw up. Not cool, especially to a tight budgeted backpacker. As great as the hostel is, a boycott of the place would be sweeter.

This is it. The one horrible hostel we stayed at. Avoid it. Tell others to avoid it. We booked it as a last resort as it was around Easter… We were then told by others that it is a dive. We got there and although it was not disgusting, it was dingy. It advertised a great common room, restaurant, bar, free internet and free breakfast. None of it was true. The bathrooms were small and mixed. The dorms were small and dank. The worst part was that the staff made you feel like you were imposing. They had satellite TV which was great cause Jon and I wanted to watch hockey. Only problem was that this janitor/maintenance looking guy (who all I saw do is drink and watch TV) was in control of the remote. He would not let anyone change the channel and would even take the remote with him when he left the room. Mighty neighborly, mighty neighborly.

Again, a hostel can really make for a great stay so some of there will look familiar:

This is where I stayed with friends and had a great visit. Bergen is like a small Vancouver with the ocean, Mountains, and rain. The food is great and the people are very friendly.

(Picture: Bergen from above)

I was not expecting much from Buda or pest but could have easily stayed longer. It was surprisingly beautiful and offered a lot of fun activities. The spa’s are amazing, they definitely know how to kickback there. Also, I had a very relaxing stay at a nice hostel so that helped sway me. 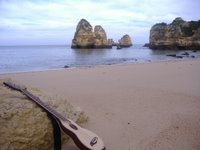 Some very good times were has in Lagos. Great hostel and breath taking coastline makes it one of my favorite spots. On the downside this is where Jon got mugged. Also, another friend of ours got put in the hospital there by some little punks. Play safe kids.

(Picture: Guitar on the beach)

I had a blast in Stockholm. I felt so alive while there, hard to explain. It’s a beautiful city and the people are great and its not as expensive as its Scandinavian neighbors.

This capital just does not have that much to offer. Over rated by a lot of people

This is where I woke up feeling fat and sweaty and out 50 euro just on beer. Another over rated stop.

This one’s tuff. Europe has a lot to offer and again, this is my tastes and preferences:

Norway – Very cute and friendly. I was quizzing Sonny on all the Norwegian pick up lines.
Sweden – Blond hair, blue eyes and great bodies…what else is there? Personality and brains
are over rated! Totally kidding.
Latvia – #1 by far. Hands down. Must be something in the not-so drinkable tap water. A lot of the women have this kinda bitchy look that is somewhat exciting. Just me? Alright then…

Ha! Trick question, you know I like boobies. Next question.

These are city’s I could rome some what care free and not worry about getting stabbed:

Again, trick question. I feel safe everywhere, you know why? Cause I’m a man, A man who invented the wheel and built the Eiffel tower out of Braun and steel…that’s the kind of man I am. Its science….

But honestly parts of Spain and the small streets of the old town in Tanger freaked the hell out of me.

This is easy, Germany…no wait…Belgium…no…Czech….No Germany. Germany…final answer. When a country has laws about what they can put in their beer, you know its gonna go down smooth.

Budvar (original Budweiser…which, unlike its North American cousin, tastes nothing like dog piss)

(Picture: This is actually taken at the best fish and chips place I have eaten at…and its in my home town. They just happened to have the 2 Czech beers I love!)

Croatia – Zaltborg? I think I liked it cause it had a goat on the label…I mean common, a goat!

Portugal: Super Bok – Jon describes it best “Its lick licking a bus rail!”
Italy: Moriarti (?) Again, Jon: “Its tastes like you have a bloody lip!”

Italy and France. I swore of beer for a month. It only lasted a week but we were in southern France and Italy at the time so the wine filled the void nicely. So very cheap too!

Greece – Grappa. I gotta tell you, it tastes like pure gasoline.

Coffee in Europe is so strong but so good. Italy and France in particular. I’m not much of a coffee drinker but I had to have one everyday in these countries. Tim Horton’s just doesn’t cut it anymore.

Again Portugal and Greece take this one. Not sure why, but as soon as you cross the Adriatic, instant coffee is everywhere. 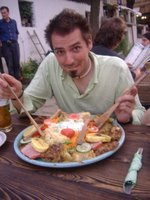 I had the best meals in Germany. Very hearty. Roasted pork, dumplings, Gnocchi, mmmmm…..
Other meat and potato places were Latvia and Slovakia. Goulash and porgies were my favs. So good and so cheap. Italy is also up there with the best pizza (of course) and pastas.

Can’t say I had many bad meals but Spain did not have much to offer. Not a big Pai ai (?)fan. 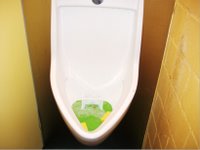 Europe was not as dirty as people led me to believe. A lot of Public bathrooms were spotless, but you also had to pay for them. In Switzerland and I think Germany, there is actually a chain of bathrooms caked McClean. A very modern “Ikea” like place that is more an experience than a daily function.

(Picture: A soccer net in a uniral…Goooooaaaaallllllll!!!!) 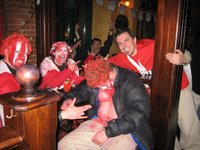 France and Italy. Good God. All I can say is I am glad I am a dude. In Turin, after one of the hockey games, we were at a bar with a ton of drunk Canadians, way more people than what the facilities could handle. The mixed Female/male bathrooms were just holes in the ground. After awhile about an inch or two of “liquid” was present. One large topless dude, who I saw earlier that night slamming numerous beers at a time, was passed out and had to be dragged to the bathroom to throw up. Face down puking on the floor in that mess is not something I would wish upon anyone.