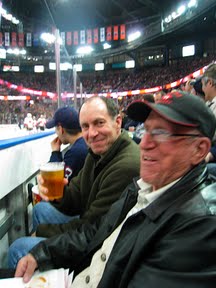 This years Easter weekend was very special. Not only was it the last family gathering of its kind in my house (for me anyway), it was Erin’s first time cooking. She was also cooking for very special guests as the company included my grandfather, aunt and uncle from Ontario.

The weekend started out with rink side seats to an Oilers/Flames game. Although by that point the Oilers were officially out of the playoff race, the fact that I was there as part of three generations of my family was pretty cool. It was also the Oilers last home game of the season and my last home game for probably a long, long time. The seats were amazing. Definitely a different perspective than my usual 300 section nose bleed seats. We saw some incredible saves and hits from those seats. Thank you to my mom for a great birthday gift. She made a very meaningless game very meaningful for me. 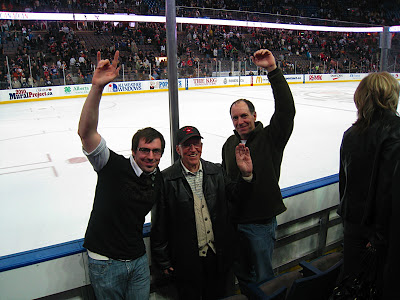 After the game we made our way to Whyte Av via the LRT (Edmonton’s light rail transit) In the 8 + years I lived in that city that was only the 2nd time I have taken it. Funny story, the first time I took it was this past St.Patrick’s day. The line only goes in 2 directions and somehow we ended up at the University and not the Oilers game. I blame the green beer. This 2nd go around we almost went the wrong direction as well. I blame the stadium beer. Good times. We managed to make our way in the right direction and met up with the ladies at Julios and had some bulldogs. Those drinks will be missed. 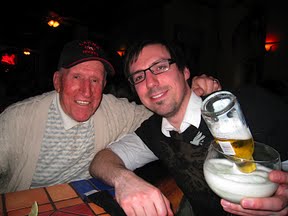 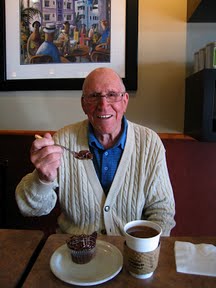 Easter Saturday (is that even a day?) was gorgeous out. Shorts, T-shirts, and bocceball in early April is now a must for me. I’m pretty sure that was the earliest the balls were out since I got them…insert bad joke here. Sunday was followed up with more bocce ball and some last minute grocery store errands for dinner. I got to spend some downtime with my grandfather as we dropped off Erin at a grocery store while we went to pick up desert at a bakery. We were supposed to just pick some cupcakes up but my Grandfather thought it would be best to sample some cupcakes while we were there. Wisdom does come with age so I agreed. How great is this picture?

An excellent turkey dinner followed which featured the moistestest (making up words and days!) turkey west of the peg. I like to think it had something to do with calculating the exact perfect cooking time. To get as accurate as possible weight to cook time ratio I weighed myself with and without the bird. As you can see I wanted to be very accurate. Juiciest butterball ever. The bird was good too. Hey-O! 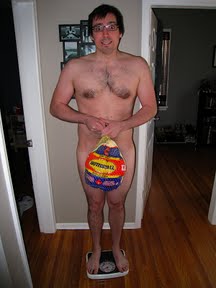 Our short fun, food filled weekend came to an end Monday AM when I dropped everyone off at the airport. It was a great visit and it meant a lot to me knowing that the move was coming…although there will be a new home soon…

Shortly after having a house full of family and friends I had a house full of nobody but me. A day filled with video games, turkey leftovers, and the 1986 NBA eastern conference semifinals followed. All of it in my underwear and Homer Simpson slippers, all of it awesome. Best holiday Monday ever.