While Erin was away visiting her family and new niece I thought it would be nice to replace the wire mesh pantry shelves with sturdy wooden ones. Erin had been bugging me to do it since moving in and being alone for a few days just seemed like a good way to kill a day. Plus, last time I was alone over the holidays I tiled a tub surround…and smoked a whole turkey on the BBQ.

Living in a brand new place doesn’t give much opportunity to renovate. It is something I miss from living in a 60 year old house so I was excited to follow through on this little task. I took extra care removing the old shelves and patched, muded,  sanded, and painted the large holes left behind. I painted all the shelf ledges with love. All for none. When I drilled through the last ledge I was going to put up for the night (10:30) water started trickling out.

At first it was an “oh that sucks” but I knew once the water was off I could open the wall and fix it. Unfortunate but No Biggie. When I shut off the main water into the house and the leak didn’t stop it was a “huh….” By this point the water was starting to pool and was coming out the smoke detector on the floor below shorting it out and setting it off.  The panic started to sink in as I frantically shut off every valve I could find. When that failed I went two doors down to a neighbor who is on the strata. He was at the tail of of a Christmas diner party with family and ended up helping me plug a leak for the next 2 and a half hours. We started by removing the screw which was a big mistake as it opened a fire hydrant in my kitchen. There was a lot of pressure in that pipe. Turns out it was the main line that feeds all the sprinklers in my place and getting it shut off was quite the process. A contracted company had to be called in as well as the building maintenance guy to get access to the shut off room. All of this at 11:30 at night during Christmas break. To add insult to injury once the sprinkler lines lost pressure it set off the very loud, very piercing, fire alarm…in all the units. I was that guy.

When all was said and done the damage really wasn’t (isn’t) that bad. Some laminate flooring and a few drywall patching. It could have been much worse. Silver lining, when pulling off the baseboard in the pantry closet we found that a nail was punctured through the same pipe so there was a very small leak already. Also, when pulling up the floor we found mold underneath by the door which led to finding a significant leak under the door. Your welcome. 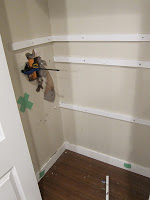 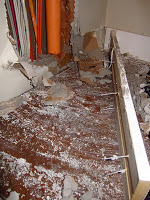 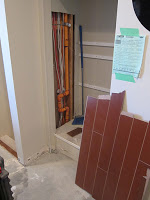 Christmas wasn’t all soggy. We had a nice day of Skyping with Erin’s family then hosting a Christmas feast for friends. Yet another good bird was had and the subsequent left overs fed me for the whole duration that Erin was away. I may have eaten an entire pecan pie to myself. Don’t judge. That pie fed me for a couple days as I sorted out the mess I created.