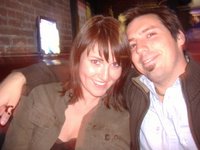 After Scott tackled Erin as she arrived at the hostel we had a few drinks on the patio then headed out for a Friday night in New York. We took some bad advise from a hostel employee and ended up in the upper east side which turned out to be a very college part of town where rich kids drink over priced cocktails and blow rails in the bathrooms. Awesome. It was New York though and we did have some fun. 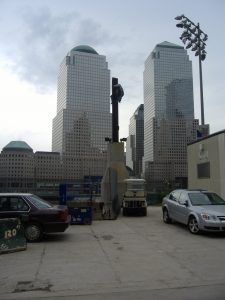 The next morning the 3 of us were up and out to see some sights. On our way downtown Scott had to stop at New York’s largest outdoors/camping store where he spent a lot of time, but not much money. He got a really nice jacket and liner for a third of the price he would have paid in Yellowknife. After pulling him out of there we walked by where the world trade towers used to stand. It was very eerie being there. A huge pit is all that is left. Around the site there are pictures and stories from September 11th, 2001 as well as a time line of the day. Again a very eerie and odd feeling being there after being glued to the television on that day watching in disbelief. Not a happy way to start our day but was good to see. 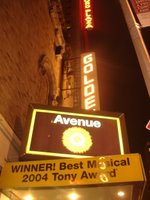 We made our way south through wall street and by the New York stock exchange then to where the ferries are to Liberty and Elias Islands. We got off on Liberty island and walked around taking pictures along the way. You get a great view of the New York skyline as well as the statue of liberty. It cooled down and rained a bit so Erin wore Scott’s new jacket. In the picture it makes it look like it was 20 below but it was a decent day.

The line ups for the ferry was a lot longer than we had hoped so we had little time to relax before heading out to a Broadway show. We went to Avenue Q which was recommended by a friend. It was hilarious. Picture Sesame street for adults. With puppets singing songs like “Everyone’s a little bit racist” and cute “bad Idea” bears that convince the main character to spend money on booze instead of food, its hard not to laugh. It was really cool but not what I had in mind when you think of Broadway.

The next morning we slept in and had little time to get to the airport. Scott had some more 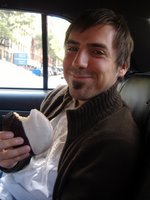 time so he headed to china town for some eats before heading to his airport for his flight. Erin and I flew out of Newark and took a cab. I hourly enjoyed a black and white cookie on the ride out. I did not enjoy the cab fare as it was close to $80 U.S. We didn’t know you had to pay return fare. Now you know at our expense. You are welcome.

It was a great but short weekend and we had a lot of fun. New York is an amazing place, a different world almost.

I had a really great time with my brother and am glad we did the trip and am sure he can say then same. It was a great week.

Back to Toronto for some R & R…ya know, cause life has been pretty stressful for me lately.

Lightweight, powerful, and currently on sale!