Perched on the north shore of Lake Ontario and guarding over the mouth of the Saint Lawrence River sits one of Canada’s most underrated cities to visit, Kingston Ontario. Like many, I’ve passed through Kingston travelling between Toronto and Montreal and like many, I have noted the historic limestone buildings, cosy coffee shops, and the sailboat-dotted shoreline and said to myself “I should really stop here someday.” Once again, like many this “someday” seemed to be just that. Separate trips from Toronto to Ottawa and Quebec City brought me past Kingston’s door without stopping in to say hello. With 2017 being Canada’s 150th birthday I made an effort to see as much of the country as possible. This meant getting off the 401 and finally discovering Kingston. What I found was an energetic food and music-loving town with a history like no other.

My time discovering Kingston began how visiting any new destination should, drinking and eating with locals and getting their take on what sets their city apart. Squeezed onto the patio of Dianne’s Fish Shack overlooking Kingston’s harbour, I received the most awesome introduction one could ask for. 86-year-old author and self-proclaimed foodie Laurie Lewis gushed about her hometown’s dedication to food and the arts. In between trying to set her up with my grandfather and comparing Kingston’s street tacos to Mexico’s I realized I was in for a treat. Reconnected high school friends Gary and Flame agreed. The food scene in Kingston is on point. “Gary is my restaurant boyfriend” jokes Flame about her excuse to try new restaurants and dishes.

Their passion and interest in discovering new treasures in their own hometown struck a chord with me however with a population of roughly 130,000, Kingston isn’t a big city. Was there really that much of a food scene to explore? This became my goal but as I quickly found out, it was an easy and delicious task.

Saturday I strolled the expensive farmers market and artisanal stalls surrounding the iconic City Hall. Mixed in with the fresh produce, butter tarts, and maple syrup you will find local entertainment and city-run chef demonstrations. Clearly, Kingston takes its food seriously. I watched as a local cook went through grilling the perfect steak. The large audience ate it up, figuratively and literally with samples of the finished dish. Curious about what made Kingston such a dedicated foodie town, I chatted up a local vendor who was quick to point out Kingston‘s ease of access to nearby farms for fresh products to play with, as well as the community of chefs helping chefs. Makes delicious sense and is a win for locals and customers.

Deep into their wine cellar, this conversation continued at the Le Chien Noir Bistro, one of Kingston‘s favourite restaurants. At its core, Le Chien Noir is fresh and local. They source their products from local growers and offer farm to table options that are creative and delicious. You don’t have to look too much further than their duck confit poutine with brie to see what I mean. Lunch with owner Jamie Hodges at the Juniper Cafe, Kingston’s somewhat hidden gem and only waterfront patio in town, echoed what I had heard since I arrived. Kingston is a community full of food-loving folk with a massive pantry at its doorstep. Of course, this makes for good eating and visiting.

Alongside Kingston’s love of fresh and local comes a beer scene that is both historic and new. As I found on my time discovering Kingston with Kingston Food Tours, my prejudice against Ontario beer was grossly misguided. I had always associated Ontario with big beer companies pushing easy drinking over any sort of flavour or complexity. From IPA’s at Stone City Ales (Kingston‘s newest craft brewery) to traditional ales at the Kingston Brewing Company (Ontario’s oldest brewpub), Kingston’s beer scene is anything but watered down.

Yes, my brief time discovering Kingston was full of surprises, and I’ve only scratched the surface.

Around 10:00 pm at the Red House, one of Kingston’s many happening watering holes, the bar is filling up fast. This is where I realized there are many sides to Kingston. Its lively food and drink scene led me to question where everyone was coming from to enjoy it? Yes, Kingston is many things, but at its core, it’s a university town. Home to Queen’s University and the Royal Military College of Canada, even in the summertime their presence can be felt.

With this young crowd comes energy and an energetic music and arts scene. This, of course, is nothing new. Kingston is home to Dan Aykroyd, Brian Adams, Bedouin Soundclash, and most notably, The Tragically Hip. For those unfamiliar with The Hip, their name is fitting for not only the band themselves but their hometown where they played out their career swan song. After 30+ years establishing themselves as Canada’s House Band, Hip frontman Gord Downie announced in early 2016 that he had terminal brain cancer.

Miraculously, The Tragically Hip went on to play one last cross Canada tour with the curtain call in Kingston. That show was broadcasted commercial-free on the Canadian Broadcasting Corporation to 11.7 million Canucks, more if you count all the viewing parties held from coast-to-coast coast. Think about it. A third of the country tunned in which is pretty incredible. The scenes from a completely packed downtown Kingston was heartwarming. It was a celebration of life still living and done in incredible fashion. It showcased Kingston’s energy and love and cemented itself in Canada’s music history book, ironically, in a tragic yet hip way.

Shaking off a late-night exploring the cool side of Kingston, I headed out (and up) to discover some of the areas natural beauty. With lakes, parks, and rivers to explore Kingston is also an outdoor playground. Thanks to a scenic flight with Fly Kingston I got to see the regions summertime attraction, The Thousand Islands. Although I stopped counting around 25, this collection of islands at the mouth of the St. Lawrence is home to a national park, a massive castle, and plenty of cottage homes. Taking a boat cruise is a popular excursion from Kingston but as I found from above, the perspective is unique and allows you to spot the sunken ships of yesteryear.

As I strolled the streets of Kingston taking in the annual buskers festival, my eyes naturally wandered to the historic buildings in and around its walkable downtown. From the limestone courthouse and City Hall to the mansions that once housed the city’s (and country’s) founders, Kingston is a pleasure to walk. Coming from Vancouver, a city of glass condo towers and cookie-cutter homes from the 70s, seeing anything with any sort of historical value is a treat. There is no shortage of treats in Kingston.

In my tower room at the Hochelaga Inn I got a sense of just how unique visiting Kingston can be. Built in 1879, the Hochelaga Inn was originally the home of John McIntyre, a prominent lawyer, and Kingston’s very first mayor. Today it is a 21 room guest house with modern conveniences alongside the charm and character from its origins. This means antique furnishings and creaky stairs with air-conditioned rooms that may or may not be haunted. The Holiday Inn, it is not…and that’s the point. Kingston is a historically cool city. Why not stay somewhere as historically cool? 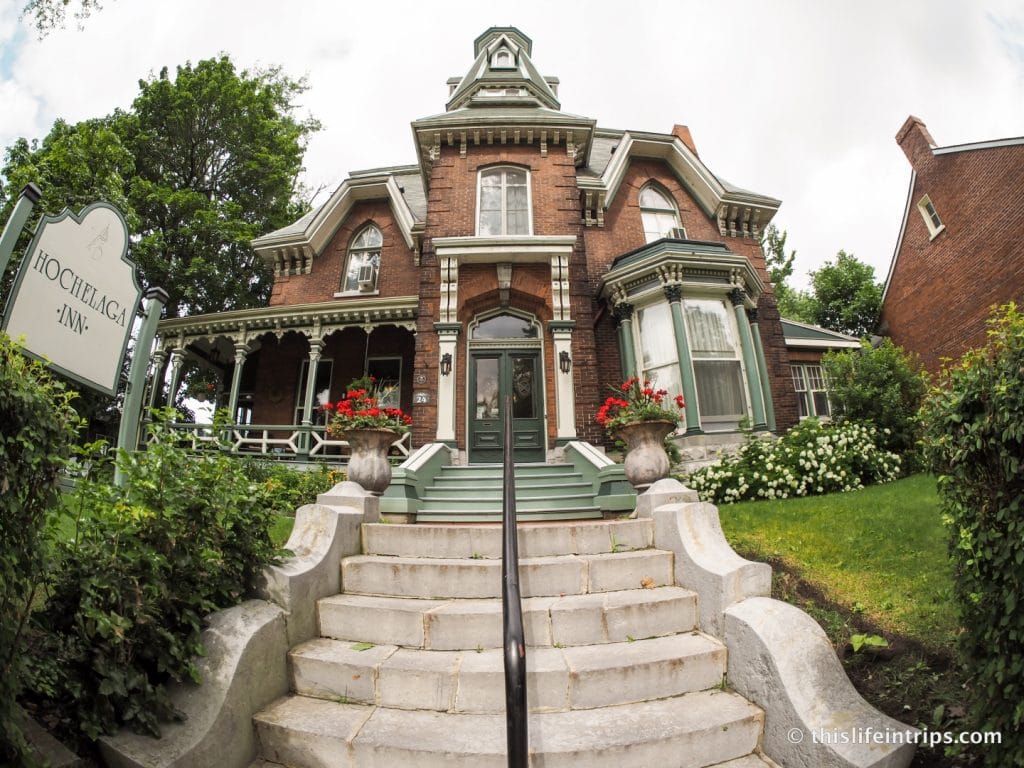 Kingston is also home to Canada’s first and longest running prison. Now, it’s not normally something I would note but Kingston Pen is surprisingly stunning and has recently been opened up to the public for tours. As I found on my time discovering Kingston, visiting Kingston Pen is the hottest ticket in town.

Kingston is also home to Canada’s first prime minister, Sir John A McDonald. For or a brief period Kingston was also Canada’s original capital city. Its waterfront location across from the United States made it vulnerable to attacks which led the capital to be relocated up the 200 KM man-made Rideau Canal to Ottawa. Still, remnants of its defense are still present today with the stone towers along the water and massive Fort Henry overlooking the town, guns pointed south.

Although I was discovering Kingston over three days, it didn’t take long to fall for the place. With a passion for food, beer, and music paired with its historic buildings and country building past make it more than worth a weekend trip. Even though I left Kingston slightly heavier than when I arrived, I also left with a better appreciation for my country and the role this city has in it, both then and now. Consider that the next time you cruise past Kingston on the 401.

What say you?
Thoughts on my time Discovering Kingston?
Let’s hear it!

Although I was discovering Kingston on a press trip organized by Visit Kingston,
the experience, opinions, and new found love of country are my own.