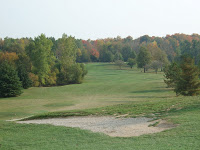 It was a pretty weird feeling getting off the plane and immediately start sweating. It was, after all, October. Even though we only had a couple hours of sleep and were still possibly drunk, Erin and I did not want to waste this beautiful day. Not fully thinking it through, we decided on 9 holes of golf. Don’t get me wrong, it was a very pretty course and the fall colors were amazing, but no sleep + hang over = terrible golfing, sweaty Shaun. Truth be told, golf and Shaun don’t mix on most days. After about three holes I was done. None the less, it was great to get out. Erin and her father Jon had decent games so that was good. 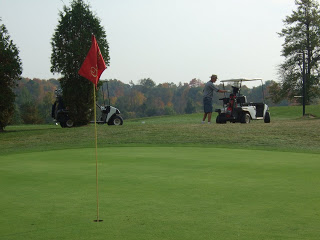 That night it was dinner part one which consisted of an amazing ham and my new favorite, pistachio salad. 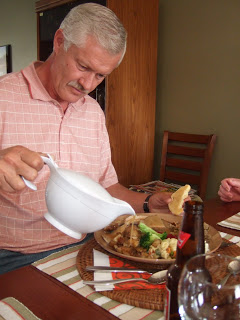 Erin’s folks pretty much spent the night cooking for dinner #2 which was at Erin’s sisters place in Chatum. At least I was not the only one packing a lot in. The reason we were rushed for the next day is that I had noticed online that the Oiler’s were playing in Detroit that night so being the “think now, suffer the consequences later” type of guy, I got tickets for all of us and a Detroit Hockey Trip. This meant eating an early afternoon turkey dinner then piling in the mini-van to watch the game in Detroit then drive through the night back to Toronto to catch my 7:00 am flight home. 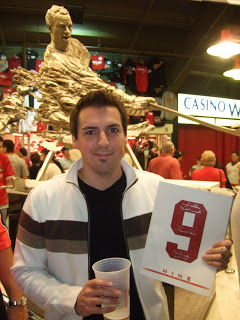 Again, dinner, or our large late lunch, was awesome. I think I have eaten more that weekend then I have in the past month. Dig that gravy form.

Going on a Detroit Hockey Trip was really cool for me. Even though the Oiler’s did not bring their “A” game, the whole event was a lot of fun. From the shouting of directions from everyone in the van on how to get there to the heckling from the locals when the we cheered after the Oilers scored, it was a great time.

To show their appreciation for the tickets, Erins family got me a book on Gordie Howe and even got it signed by him as he was on site that night. Below is the picture of me with the book in front of a statue of Howe.

A great weekend indeed. I don’t think it is humanly possible to pack more food, fun, or distance into that short of a period. Leave it to me I say.