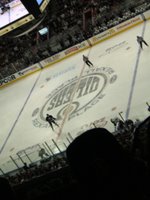 I was pretty worried I was going to get weathered in at Ft.Chip or things would go wrong with work and I would have to stay an extra day but surprisingly I made it back with more than enough time to meet Erin at the airport…and I was still late. Maybe punctuality should have made the manifesto.

Erin’s visit put some pressure on me as I had no idea what Edmonton has to offer except decent food and me. It was a good opportunity to see if in fact my home was “deadmonton.”

Friday we went to the Oilers vs. the Stars. I wanted to show Erin what real hockey was like. The first two periods made me look like a jerk as the Oil were desperately out played. The third was a different game as in the last minute, with the goalie pulled, Edmonton scored twice to tie it up. Awesome, or so 16 thousand fans thought. The tying goal was waived off because of a hand pass that never happened. The replay showed it was 100% clean but the call stood and the Oil lost. The place went nuts. The ice was littered with garbage and the ref was hit a couple times with beer cups. It really did feel like a rip off. 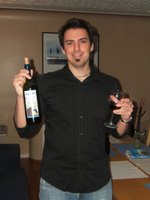 That Sunday we went to the sidetrack, a favorite hang out of mine, for some free comedy and music. The place was definitely not as jumping as it used to be but the show was still pretty funny. One comedian commented on Erin’s shirt then backpedaled as he then said I was huge. We both liked him.

That week I had to go to Calgary so Erin tagged along. She has friends there so it was good to visit. The weather was terrible so the drive was crappy. Couldn’t see much of Calgary as it was nearly white out conditions.

Weather also played a factor in Edmonton. Apparently there is a lot to do…in the summer. We went to the Royal Alberta museum which had a not so impressive Lego exhibit. We tried to go to the Mutard but it was closed by the time we got there. Good intention points? 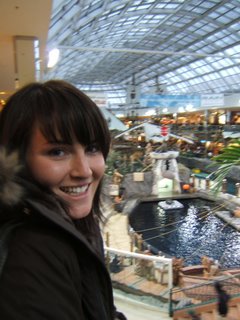 My mother and Al were in town so I made dinner and was fun to visit. Al got into the “old fart” wine before Erin, Dave and I headed out to Whyte av. Let me just say here that there is no wonder why Edmonton has a drinking and driving problem as getting a cab in this city is next to impossible. The city needs to do something. A night bus or cab line up/depot comes to mind. We spent over an hour freezing as we walked the av looking for a ride. We finally passed a group of people a flagged a cab down. I felt terrible as these people were probably waiting just as long as us, we just happened to pass them at the right time.

And of course a visit to West Edmonton Mall.

So with a bitterly cold impression of Edmonton, Erin was off to tropical Toronto. I don’t think it left that bad of an impression as she is coming back in December.