A Day in Annapolis Royal

The next morning we were up and out early, something I have not been used to. We stopped at balancing rock which is just that. Pretty crazy to see as it is a 20 foot pillar-like rock balancing on the edge of a cliff. We hiked down and got some pictures with it and joked that with our luck it would topple over. Thankfully it survived our visit. More thankfully we survived visiting it.

Down the road we stopped at Dingby which 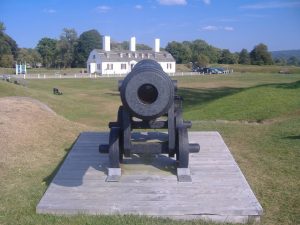 is a nice small town. Lunched on some 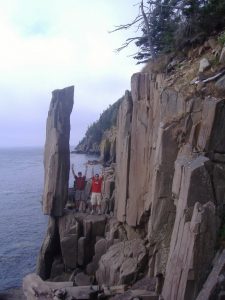 scallop and bacon subs and continued on to Annapolis Royal. Some very good Canadian history there. We took a walk around the Ft.Ann grounds where the have the oldest house in Canada… I have noticed Nova Scotia boasts a lot of things like this. The oldest street (as does St.John’s) the first city (again, St.John’s) and the birthplace of hockey (Windsor?) At that point I had enough and wanted this straitened out so suggested we seek out the mayor and get it all sorted. No such luck.

That night we had planned on camping at Cape Split. We arrived to find the campground was closed for the winter. No worries, there was another down the road. That one turned out to be closed as well because of a family problem. Not out night. We ended up in a motel nearby.

The next morning we were up early. I forgot there was a 6:00 am. The reason we were up and out so early is that we wanted to be at the end of an 8 KM trail for high tide. I am glad we did because the view we were rewarded with was awesome. We got a great idea of how much water is moved through the bay of Fundy. It looked like a fast moving river, not the ocean. It was amazing. Nnature is cool. 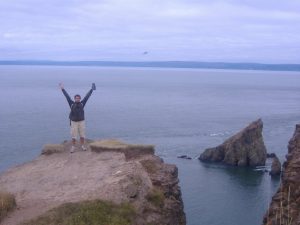 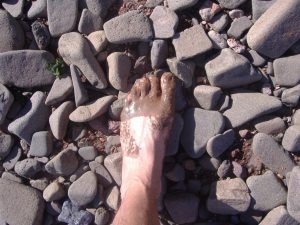 it) at this beautiful red cliff, red sand beach. Before lunch I walked down to the beach and thought it was a pebble beach and told my aunt and uncle this. After lunch, about an hour later, we walked down to see red mud a kilometer out. That’s how fast the tide goes there. Boy was my face was red. I felt like quite the fool. Nature 1, Shaun nothing.

We spent the rest of the afternoon playing in the mud and enjoying the sun. It was gorgeous out, hottest spot in Canada. Can you feel the heat? Probably not.

All in all a great Day in Annapolis Royal area.