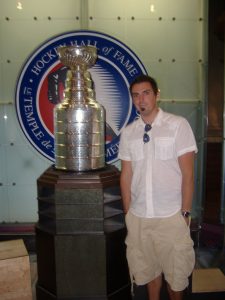 Concurring my fear of roller coasters

Toronto is a cool city. I have passed through numerous times but never really took any of it in. I was lucky to have tour guides this time as I stayed with Erin and Steph, whom I met on a train from Krakow to Budapest. They are a lot of fun and great hostess’s. I saw a lot in Toronto and had a blast. My favorite sights were the hockey hall of fame, center island, and Canada’s Wonderland.

The Hockey Hall of Fame was very cool, so much history, information and games. I was like a little kid in there. I could have spent hours reading stats and stories but didn’t want Erin to sit through that. The hockey masks through the years were sweet and I got to see the original Stanley cup.

Center island is a great escape from the big smoke. We headed out to watch some wake boarding competitions but were pretty slow moving from the night prior. Instead we toured the island, walked out to the piers, got lost in a garden maze, and saw a sunset I didn’t think possible in a big city. There ferry ride to and from the island is worth the trip itself as you get a great view of the city, very cool at night as the skydome is light up. 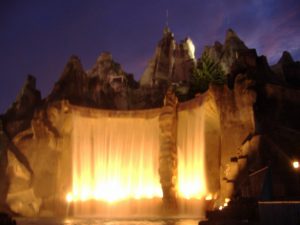 And of course, Canada’s wonderland. So much fun even though it rained most of the day. I was actually on a mission going there. A mission to regain my youth and finally become a man. No, Canada’s Wonderland didn’t steal my barmistfa party, I had that…and Im not even Jewish! I(but you could tell that by my spelling) Its much sadder than that. When I was about 9 or 10 my Uncle took me and my cousins there and I chickened out on every roller coaster. I even went as far as lining up for an hour only to turn around and fight my way out of the line. Sad I know. My life has been a lie. I was not a man and I apologize to the people in my life who thought otherwise. Erin said she would ease me into the scary rides but by the 3rd roller coaster we were doing loops and twists backwards…and I loved it. We did basically every ride there, even a free fall from I don’t even know how high up. We got video from one of the best rides as you can see me mouth ” My balls!” as the g force crushes the harness down. So funny. In the lineup to that ride there was a kid who chickened out at the last minute just like I did. I should have grabbed him and told him to man up but at that point running still looked like a good idea to me! After that ride everything felt like child’s play. I was even comforting Erin on some rides, including the one I ran out on years ago. I was laughing at the ride and pretending to fall asleep and then we hit a bump and I cracked my knee on the safety bar. It was almost like the ride knew I was mocking it. 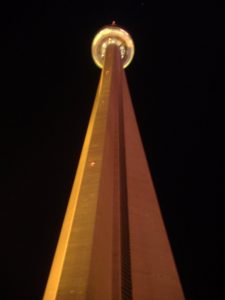 The rain finally let up so we decided to hit up a water ride before leaving. Smart idea. We got absolutely soaked and had to go and return a rental car drenched. All in all it was a great day though.

The next night Erin’s sister and brother-in-law stopped by on there way back from the east coast. They had just done what I had planed on doing, drive and camp through Nova Scotia, New Brunswick and PEI. I have been hesitant to do it alone and after talking to them I decided I will save that trip for when I have others to do it with. It’s just to bad cause I have the time and freedom to do it now. For the time being Im off to visit with family again in Sarnia. Free rooms are nice. Family is OK.