Pin13
Tweet
Share27
Email
40 Shares
Lions Head is a sight. With its alluring position high above Cape Town it offers spectacular views of both Table Mountain and the 12 Apostles as well as Camps bay and the city itself. This incredible vantage point is yours to be had free of charge – all you have to do is climb. Simple enough, or so I was lead to believe by every Capetonian that said it was a must do at sunset. Climbing Lions Head was no simple task for me.

Somewhere between back surgery and enjoying the high life I got way out of shape. Way. Before my recent trip I was on my back for a few months then went straight to fine dining on safaris and elegant wine pairings on the most luxurious train in the world. There was also a moth spent eating deep-fried-America-sized portions thrown in between. So it was no surprise I arrived in Cape Town busting at the seams. The healthy lifestyle found in the city was a big factor in why I decided to live in Cape Town. I was going to eat salads and ostrich (the leanest/tastiest bird in Africa) and hike a lot. Climbing Lions Head was my first test. Actually climbing Table Mountain was supposed to be first but I was supposed to go at 6:30 AM after my 1st rugby experience so that didn’t happen.

While staying at Once in Cape Town I took advantage of a guided hike of Lions Head with one of their staff members. This free service, amongst others, offered by the hostel is a nice touch when staying there. I was a bit concerned about the shape I was in but Filipe, a Chilean studying English in Cape Town assured me, like so many others, that it was and easy climb. This put me at ease me but not as much as seeing the others climbing Lions Head with us – a rail thin Chinese girl and a rather large German girl. Perfect. There’s no way I would hold these two up.

Easy as She Goes

We arrived at the trail head to find a manicured and easy grade path. As we walked up I was thinking climbing Lions Head was child’s play. I was used to the Grouse Grind in Vancouver, a grueling staircase in comparison, so climbing Lions Head proved to be a breeze. Then we reached the scramble.

As we continued winding our way up climbing Lions Head the trail started to narrow out. It became a single path with an aggressive drop on the left. Vancouver’s Grouse Grind it was not. Climbing Lions Head to this point was easy going. Now I was at a fork – a longer but less aggressive route or straight up. Filipe continued on the steep way without hesitation. The girls advised him they were taking the longer/easier route. Sensing my intimidation Filipe said we could take the long route. I said I was OK but just concerned about coming down in the dark through the series of footholds and chains. 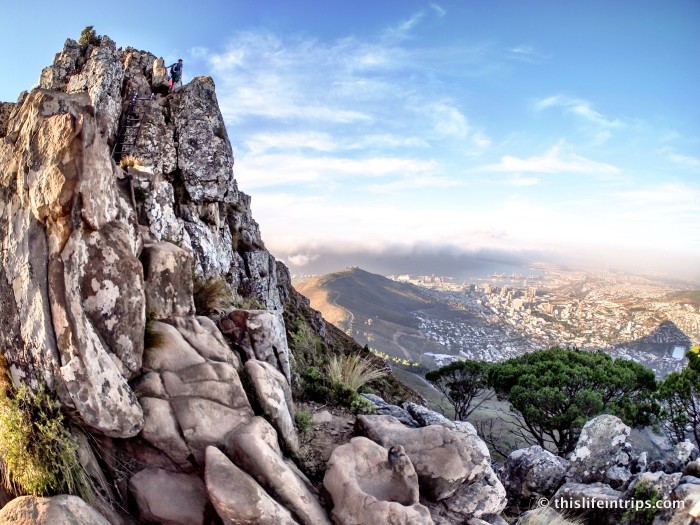 Good to be On Top

Going up wasn’t so bad. The scramble is fun but again, not something I would want to do going down and in the dark. The last incline paid off as I took in one of the most jaw-dropping views in Cape Town 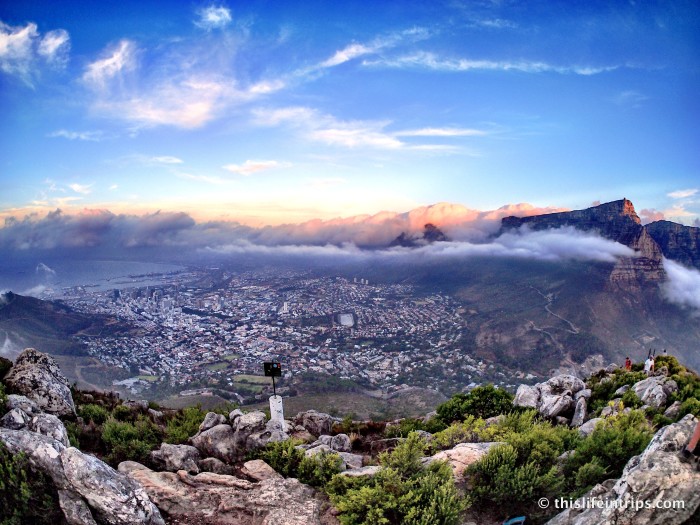 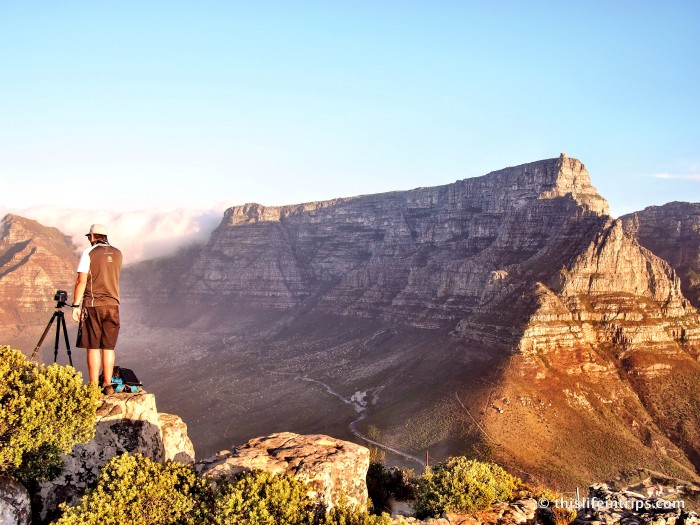 After a few photo ops and a sunset that was compromised by low clouds we made the trek down. Somewhere along the way we missed the turn and ended up going down the more challenging route. The girls were not impressed. Secretly (or not so) neither was I. The girls went first and although a little hesitant, had no issues. I continued on at what felt like a snails pace. This did not help my confidence, nor did the queue that was forming due to my slow pace. Slow and steady doesn’t fall of mountains people.

The steep decline was the least of my problems. The windy trail down in the dark proved to be tough on my knees and back. Again, neglect has not been good to me, nor was the fact that the large German girl and skinny Chinese girl were bounding down like Goddamn springbok’s. Still, the challenge was rewarding and the view from climbing Lions Head is undeniably awesome. Definitely lives up to the hype the locals create, but be warned it is not as easy going as you will be lead to believe – at least for me.

I couldn’t walk the next day, but what a view. 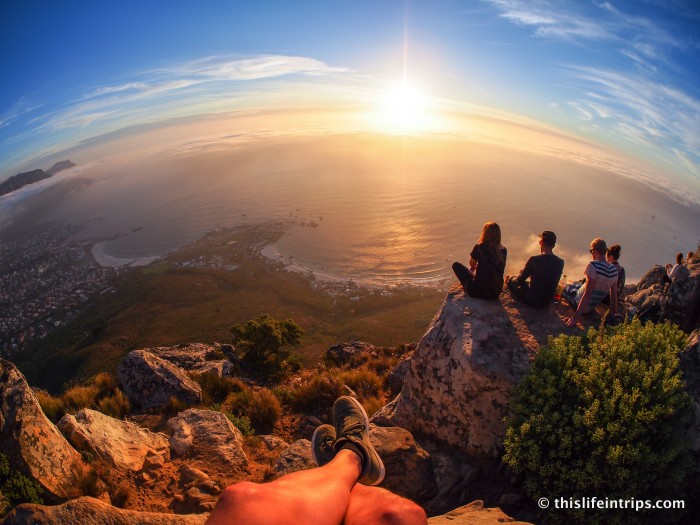 How long: It took me 45 minutes at a steady but slow pace.
Tips: Head lamps for the climb down! Also, its no picnic. Dress and pack accordingly.
Trail location: See map!

What say you?
Thoughts on the Climbing Lions Head in Cape Town?
Let’s hear it!

Although I was provided a discount at One in Cape Town while I lived in Cape Town,
the opinions, experience and post climbing Lions Head pain are my own.

Written By
Shaun Robertson
More from Shaun Robertson
Wondering what it’s like to experience the government-run and military-ruled New Zealand...
Read More