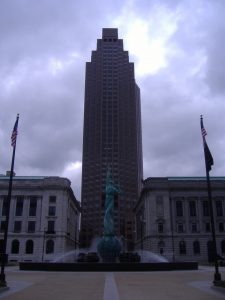 Well…not really. For a city with a hard rock reputation and the birthplace of “Rock and Roll” (the phrase, not the music) its pretty quiet and tame on a Tuesday night. Cleveland Rocks? Even the famous house of blues concert hall had a disappointing line up highlighted by the achy breaky Billy Ray Cyrus. Hardly hard rock, but don’t get me wrong, other than getting turned around and lost in a seedy part of town, I had a great time in Cleveland and am glad I went. Let me back up. I left Sarnia and headed south through Michigan. Detroit, from what I saw, ain’t pretty. On the highway through the city there were bumpers, tires and other car parts on the shoulder. Not something you want to hit going 60 mph (100 km/h for us Canucks) I did drive by Tiger stadium and where the lions play which was cool to see. Outside of Detroit I stopped at a travel stop to take a leak and grab something to eat. Let me tell you, there are some interesting folk in these parts. Some Popeye’s chicken to go and I was set. In retrospect, fried chicken and biscuits are not something you should eat while driving.

I got into Cleveland around 2:00 and passed by Jacobs field, Q Stadium and the Cleveland Brown’s stadium…Again cool to see. Checked into my hotel and walked to the Rock and Roll hall of fame. The place is huge. It has six floors and in 3 hours I only saw three. They start you in the basement which is the museum. I spent 2 hours there and could have spent more. My favorite things were original lyrics hand written by the artist. It was really cool seeing what songs could have been with lines scratched out or omitted. They had great outfits worn by different musicians like a purple jump suite Roy Orbison should have worn. By the by, Laurn Hill is a huge lady. They had here Grammy outfit on a mannequin next to Busta Rhy 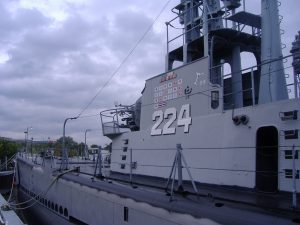 mes and she dwarfed him! 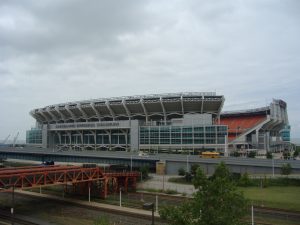 And of course the guitars! Good God the guitars! So cool. Hendrix to Cobain, Elvis to Les Paul himself. So very cool. After the museum I rushed through an exhibit on Les Paul and radio then hit the hall of fame. There I caught the end of a cool film on all the inductees over the years.

After relaxing at the hotel I decided to head out in search of something to eat and some entertainment. This is when I discovered Cleveland is a dull city. Cleveland Rocks? Everything was closed or dead. I even went to the Flats, a part of town with nightlife. Nada.   Granted it was a Tuesday night. I finally found a Subway that was still open.A Subway. Cleveland Rocks:(

I headed back in what I thought was the right direction. Not so much as I found myself by the bus depot with plenty of the interesting folk I mentioned earlier. I did make it back to the hotel and to bed. Cleveland Rocks :0

Off to Niagara tomorrow.