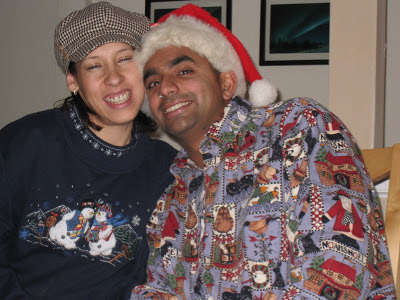 What was supposed to be a quiet break away from work quickly became busy and basted in buttery goodness. My holiday season was great. It was packed with family, friends, and food. By my calculations that equals good times.

First up was a small house party we threw which was appropriately themed with ugly Christmas sweaters. These parties are apparently the thing to do at Christmas now. Erin and I found this out the hard way as we scavenged 3 separate value village stores for sweaters with no luck. Thankfully we didn’t leave empty handed as I picked up this great, creepy, Nut cracker, egg nog mug:

We ended up with bargain bin sweaters from Wall-mart. They were no match for Mikes battery powered sweater or Jason’s table cloth shirt.

This party included some festive drinks, very strong nog and a concoction that Mike made called “Moose milk.” You know your in for a delicious time when the ingredients include a tub of ice cream, homo milk, and plenty of booze.

Christmas eve was spent at Jon’s folks place. I had missed the last couple Christmas dinners at Sharron’s and Rod’s place and then was reminded that it takes a couple years to digest the huge meal they put forth. It was a great night and nice to catch up with everyone.

Christmas day was spent sleeping in and digesting the feast from the night before. For breakfast we opened Jon’s present, 2 dozen home made perogies and kubasa sausage. Instead of buying gifts this year Jon decided to make dozens of perogies and give those out. What a great idea! Erin and I stuffed ourselves on a Ukrainian breakfast (which also included left over cabbage rolls from Sharron) Almost to full to answer the ringing phone I then found out that our Christmas dinner plans had been bumped up to 3:30. It was 12:30. Time to break out the buffet pants!

Before heading out for our 3rd huge meal in less than 24 hours Erin and I opened gifts. This was highlighted by a signed Larry Bird jersey. Being the skeptical person I am I spent the next couple hours researching how to tell if it was legit. All signs pointed to yes. In my search I began to stumble across all sorts of Celtics memorabilia which caused the wheels to turn…”Hey I can get an 8×10 photo signed by Kevin Mchale…and a Robert Parish signed piece of the actual Boston garden!” This spawned “…Well if I have the big 3 from the 80’s I should get the big three from now!” This awesome, thoughtful gift has seriously taken on a life of its own…but that is a story for another day because todays story still has some more turkey to plow threw…

Dinner at Dave and Amanda’s was pushing the limits stomach wise. What is it with vegetables at Christmas time being covered in butter, maple syrup, and/or marshmallows?? I vote for these dishes to be acceptable year round. 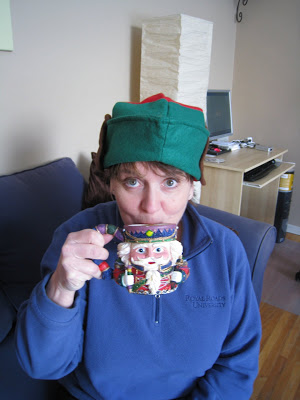 We literally wobbled our way through Christmas. Time to roll on up to the treadmill.

Boxing day was interesting to say the least. Erin was heading home for a visit so I drove her to theairport…at 5:30 am. We arrived and then found out her flight had just been canceled and her only option was to fly out at midnight on a red eye…or make her own way to Calgary to catch a flight at 2:30. 2 hours and several frustrating phone calls later Erin was on a bus (last seat too) to Calgary for a flight that ended up being delayed 3 hours. Better her than me? lesson learned, do not travel at Christmas unless you absolutely have too. Not worth the stress.

So what would become of lonely Shaun? Another Christmas tiling project? No. Fortunately my mom and brother decided to come down for a visit. More family = more food. On top of that Justin and Alison came to town so there was no shortage of visiting. And..AND…on top of that a family friend showed up out of the blue. It was a pleasant surprise to see Anna Marie casually walk in my back door. Dinner, drinks and catching up followed. Good times indeed.

Next up, a very Major Major New Years Eve…