Guitar work out in Cesky K. 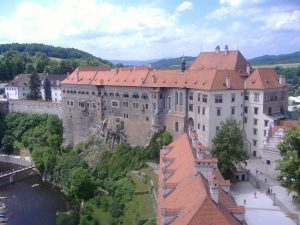 Where did we last leave off? Jon and I spent the last 5 nights abusing our bodies with the pleasures of Cesky Krumlov so its hard to recall. Prior to Cesky K. we had a brief stop over in Vienna, Austria. A beautiful and clean city but again, another couples kind of place. We stayed just long enough to eat some schnitzel and tour the palace and museum grounds.

After that it was of to the Czech Republic once again. We got to o   ur hostel and found it very cool. It has a great bar/restaurant, friendly staff, and is located within the old city walls. We spent the first night (and every other night) partying with the staff and some Aussies. One of the workers, Gavin, is possibly the funniest Scotsmen around. We laughed and sang songs around the piano till the wee hours.

The next mourning (crack of noon in Cesky K) we walked around the castle grounds. It is one kick ass castle complete with a garden, moat, dungeon, tower, and a freaking bear pit! How cool is that? From the tower we got a great view of the old town and the Vlta river. We watched numerous canoes and kayaks topple over the damn by the castle. Pure entertainment.

Feeling like we accomplished something, we headed for a pint on the hostel terrace. 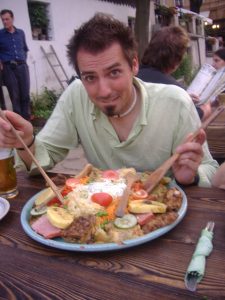 This is where we spent 85% of our time. Most of it was singing and playing guitar which is up my alley. That night Gavin broke out a banjo and another traveler had a mandolin. With me on guitar, we become “The Tats” and played for hours. So much fun. Also got into Jager bombs which is Red bull and Jagermister. Funny thing, Red bull tastes like medicine, and Jagermister is pretty damn close to medicine, but the two mixed kinda cancel each other out. More than enough to keep you going through the night.

The next day we hit the Vlata river with some rafting. Cesky K is known for floating down the Vlta on rafts, canoes, tubes etc… We had big group of great people and ended up getting 2 rafts for 13 people. Both Gavin and I brought our guitars so we tied our rafts together and played songs and sang while peacefully floating down the river. It was one of the coolest things I have done. It was great to see others raft past as we sang or when we broke into “Yellow submarine” when we passed a yellow kayak that toppled over. Along the river there are numerous bars that you can stop at. I think we hit them all so it was a long, fun day.

We had such a great time at the hostel that we ended up staying until heading for Frankfurt for our flight home. 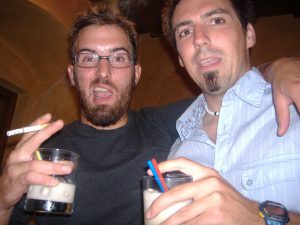 Other highlights of Cesky was the food and people we met. One night I went out with some great people and we had a huge feast. I will post a pic of that when I can. Another night we got into the absinth and scaled a castle wall. It was a memorable, yet foggy night. The last night there I met up with an American guy who could really sing and play a mean harp. We entertained the bar then hit the streets and other bars playing for whom ever would listen. Was another highlight of my trip.

All in all a great place and another one that was hard to leave, especially when you know its your last stop. I will miss the staff there as we became good friends and again, recommend the place to anyone looking for a fun time.