Waking up at the crack of dawn isn’t something I really want to do on vacation. However since most things in Kauai close at about 11pm we found ourselves getting to bed early most nights which made the early rise to get to Capt Andy’s sailing a little easier. Plus, it was one of the activities on our trip that we were looking forward to most.

We arrived to the front desk and the friendly staff told us that due to large swells on the Na Pali Coast the boat would be heading south instead. We could go on that voyage or come back tomorrow when the weather should be better. We decided that we HAD to see the Na Pail Coast. Urgh, we have to wake up at 5am again!

The next day we repeated the drive to Capt Andy’s sailing  and the marina where the boat was ready to head North. Thank goodness! The four of us and about 30 other people stepped on to the boat, were greeted by staff, given a short safety talk and fed fresh fruit, Danish and coffee. Definitely needed that coffee. The boat took off to our snorkeling destination first thing. It was pretty early so the thought of jumping in the ocean at 8am didn’t really appeal to us but this is Hawaii not the west coast and the waters would be warm. 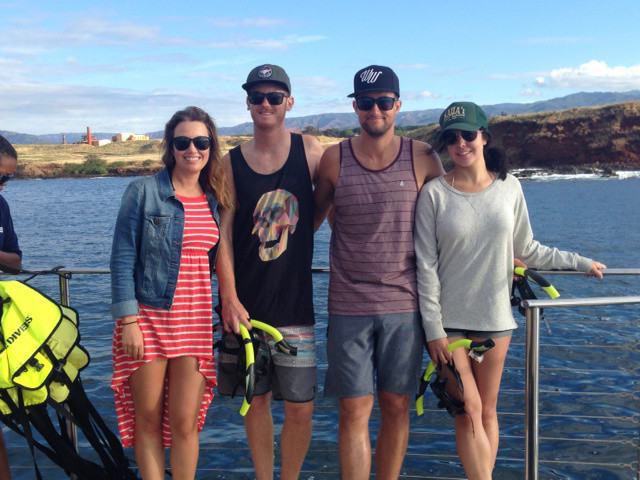 Like they had summoned wild life with a secret whistle, as we headed into the snorkeling cove a pod of dolphins and a turtle swam past the boat. Well played Capt Andy’s sailing, well played. 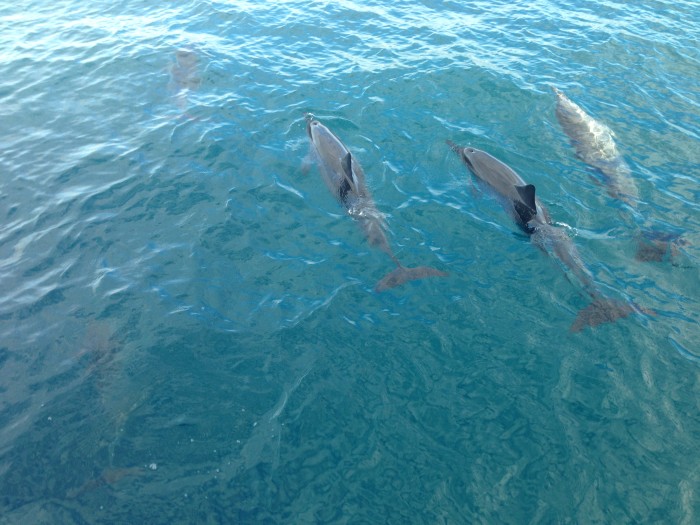 We were fitted with snorkeling equipment and jumped in the water. The staff threw left over Danish over the boat to attract the fish. Tons of colourful fish swam around us as we snorkeled around the boat. As far as snorkeling goes if this is your main goal of the trip we’d suggest looking elsewhere as the reef nearby wasn’t as impressive as we’d hope. 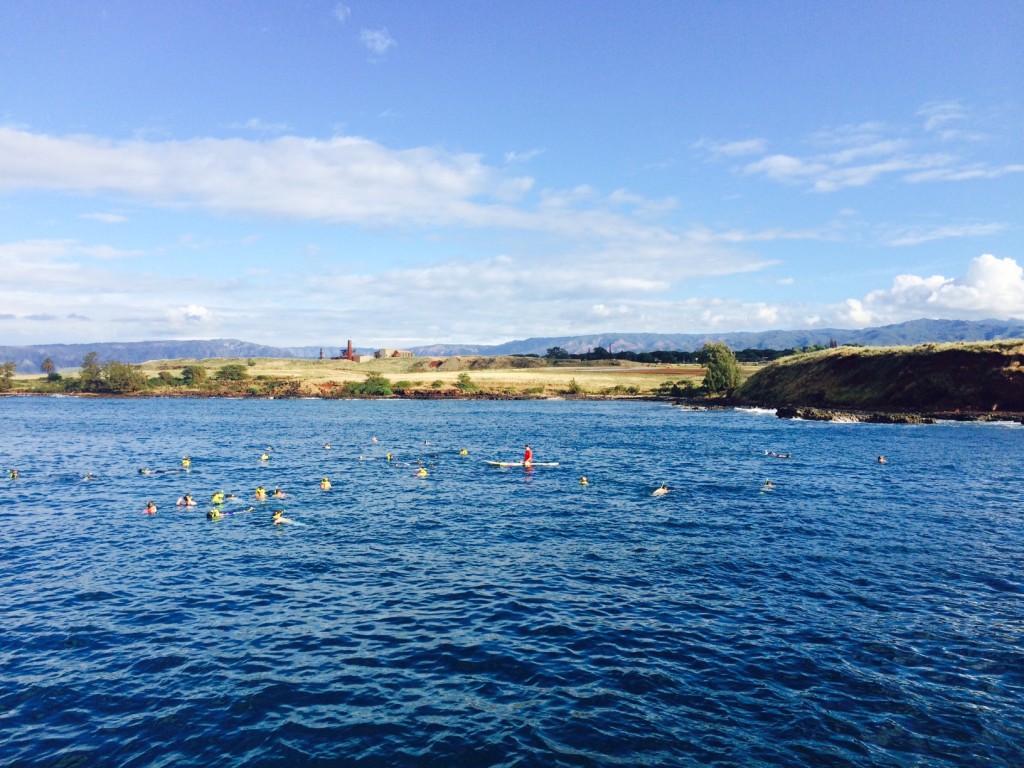 After about 30 minutes we were called back onto the boat and headed for the Na Pali Coast. Along the way the Captain and staff pointed out the sights and talked about the history of coffee production on the island. I think a prerequisite to being a captain is to have a boatload (no pun attended) of Dad jokes in your back pocket to amuse your passengers. Capt Andy’s sailing has you covered in this department and certainly made the trip entertaining.

The further up we went, the swells got bigger but the catamaran cut through the waves with ease. Word to the wise, don’t sit at the back of the boat, as you’ll feel a bit green. The best spots are up on the top front of the boat or better yet climb the stairs and sit in the luxury leather seats behind the Captain so you can get even more Dad jokes thrown at you.

Once we hit the heart of the Na Pali Coast the boat slowed down and the Captain and crew pointed out all of the treacherous hiking trails, caves, and told us the history of the fishing villages. The cliffs were amazing to see from the boat. It really looks like something out of Jurassic Park. We expected pterodactyls to fly out of the mountain crevasses at any minute. Unreal. 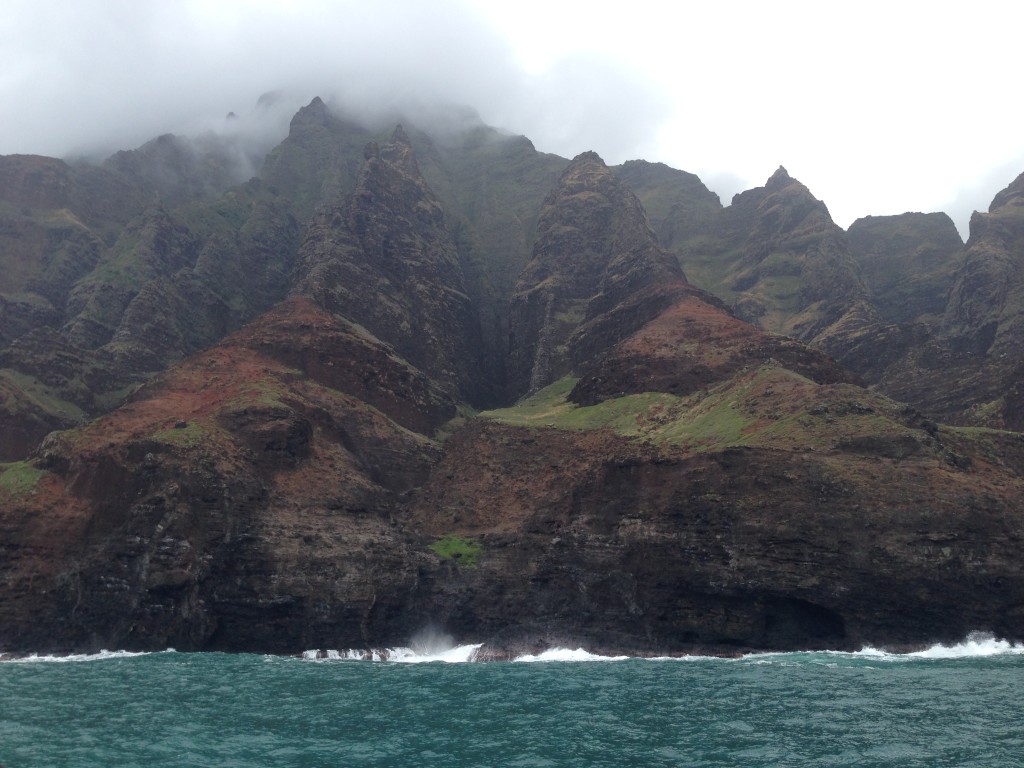 Our orders for BBQ lunch were taken, the grills were fired up, and most importantly to four 30-somethings, the bar was open. We were expecting Capt Andy’s sailing to only serve Coors light or some other popular American beer but to our tastebud’s delight they also had Longboard Lager from the Kona Brewing Company!

The BBQ lunch was delicious! Better than some of the burger joints on the Island, plus fresh baked macadamian nut cookies were served promptly after. We started heading back to the marina blasting Jack Johnson over the boat speakers while the staff refilled our beers as soon as we’d taken the last sip. 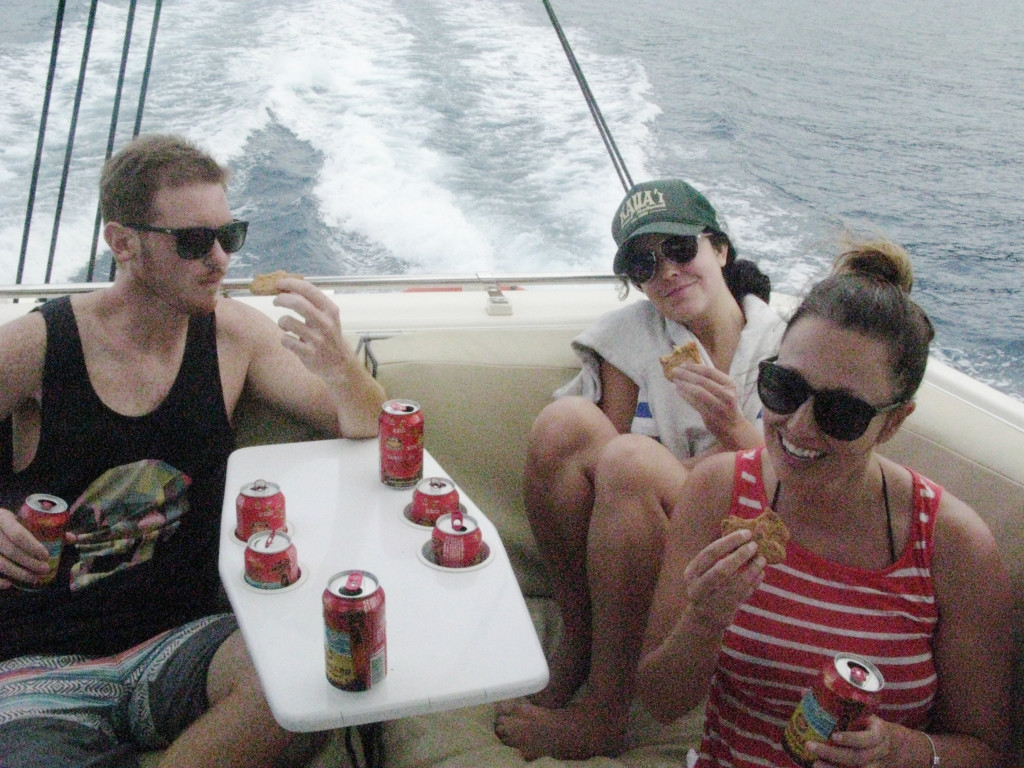 On our way back, past the Pacific Missile Range Facility, a jet was practicing flying over the base and ocean. After making several passes around over the ocean the jet flew right over our Capt Andy’s sailing boat. Perfect photo op! 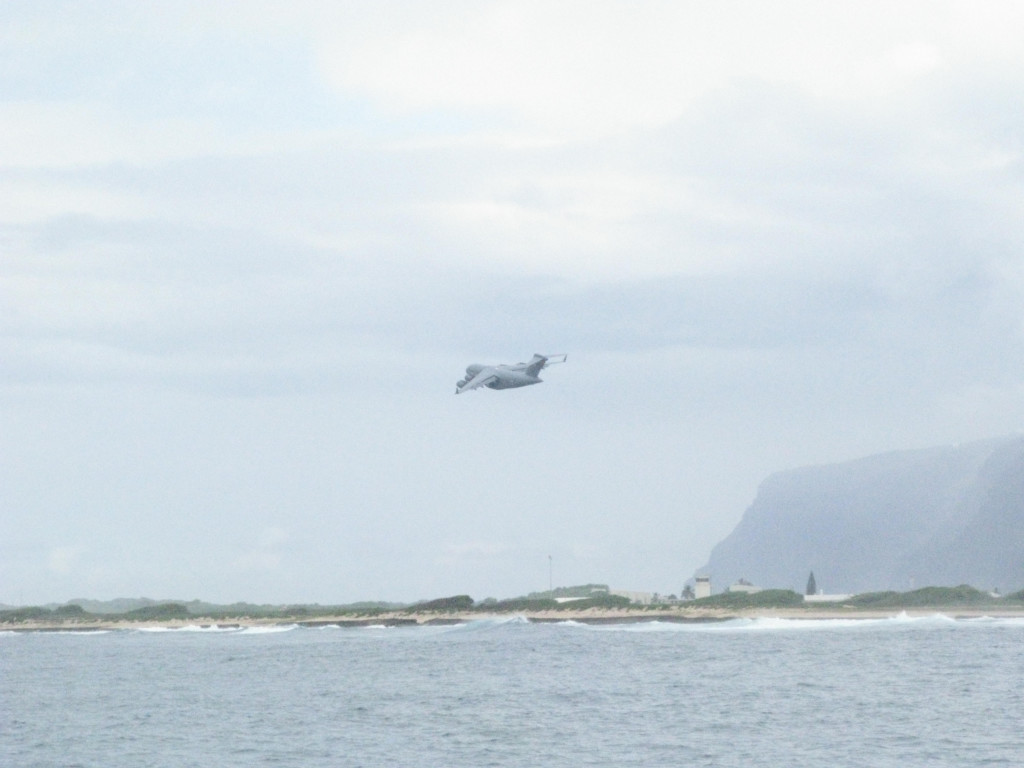 We arrived back at the Mariana, sorry that the bottomless beers had now come to an end and we departed the boat. Capt Andy’s sailing was one definitely of the highlights of our trip – a must do activity when you’re visiting Kauai.

Although Jen and her crew were provided a discounted press rate to experience Capt Andy’s sailing adventures,
the experience, opinions, and thoughts are their own.