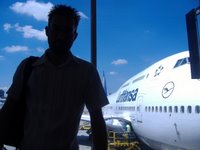 So Jon and I arrived back a little ahead of schedule. We were able to get on an earlier flight out of TO which was a very good thing, our flight was canceled and we were going to be put on a flight 3 hours later than what we booked. We arrived in Edmonton donning our Canadian flags, the very same ones we wore at our first stop in Turin. We were welcomed home by Jon’s girl Susie and her friends Melissa and Jen as well as my mother and Al. After getting cleaned up it was of to the new Sidetrack cafe to celebrate Canada day. After a few rounds the party died out and people started heading home. Not satisfied or tiered, Melissa and I headed to the only bar we thought was still serving. It just happened to be an alternative/goth bar. Needless to say we stuck out but was fun none the less. 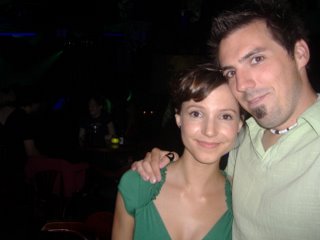 The next day Jon had a bbq at his folks place. This was highlighted by Jon’s beer fridge keg. Not sure if I posted pics of it before we left so here it is. Lots of food and friends made for a good day. 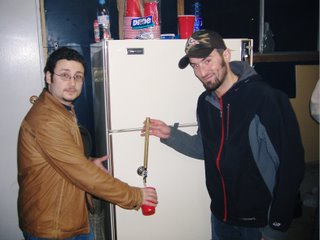 The next day I went tubing down the Pembina river, something I had wanted to do for sometime. Loads of fun but the water was pretty low and made it slow going. I had numerous bruises on my lower half from the rocks.

I spent the next few days couch surfing and running around. I visited my house to make sure everything was well and to grab cloths. I was not home sick until seeing home. I felt like just dropping my bags and relaxing…couch surfing is fun though. Stopped in at work and found that not much changes in 5 months so that is good. What else happened…I got a tattoo! It’s a poppy with barbwire around the stem. I saw it at Jon McRae’s field station in Flanders field. It was such a moving day that I wanted to remember it and thought this would be a good way. 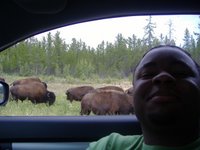 After a night out on Whyte ave I was off to Grand Prairie on a greyhound to meet up with Taj, a high school buddy who is in Aarons wedding party with me. I had never taken a bus in Canada before but had my share in Europe and thought it would not be so bad. Surprisingly comfy but man there was a lot of weirdos. Luckily I sat with a some what sane girl and we talked the whole way. Exhausted from the night before, Taj and I decided to only go out for 1 drink because we had a 14 hour drive to YK in the morning. Snow flake turns to avalanche. We ended up getting a little over 2 and a half hours sleep before heading out at 7:00 AM. The drive went really good and really fast. We did it in just under 11 hours. (Would have been less if we didn’t take a “detour” through Heinz Creek…to which I said “were the hell is Heinz Creek???”) Taj and I hadn’t seen much of each other since high school so we had lots of catching up to do and ended up talking the whole way up. Fueled by Red bull we made it into YK in time for our good friend Aaron’s stag party. What an odd, kickass night. Aaron is the Canadian Idol rapper I posted on awhile back. He ended up doing a song at the Gold Range ( a native favorite) with the country house band. Pretty interesting mix. Taj got up and did a song with him at another bar which brought back memories from high school. I used to play guitar in a group with the two of them. I also just found out that some of the songs I recorded with Aaron last year are on his newest disc. Checks in the mail. After a brief stint at the peelers (the girl stormed off stage in a hissy fit for reasons we still don’t understand) and after Aaron dodged a stalker and a couple fights we 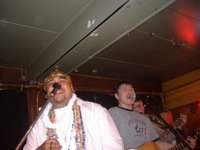 ended up at a club. This place was a lot of fun as I ran into a ton of people I hadn’t seen in awhile. This included a cousin of mine I had met once. Trevor came up to me and said hi and I just thought it was someone from high school but could not place it. Taj walked by and I asked for help “hey Taj it’s ah…remember umm…” He just gave me a funny look said I was on my own and left. Would have worked if it was a girl. Trevor finally told me he was my cousin. I felt so bad that I ended up introducing him to anyone and everyone in the bar. I think he had a good time.

I spent the next couple days lounging around and getting caught up with friends. We wanted to go camping at my dad’s cabin but the weather turned shity. We ended up at the local campgrounds which was fun but the bugs were horrible. I got up to pee in the morning only wearing boxers and got bit everywhere…and I mean everywhere! One thing I definitely do not miss about the north.

The wedding rehersal came next. Taj and I were bugging Aaron because he was so calm and had it together, if it was me, I would have been freaking out but then I realized why would you be nervous if it’s something you really want?

The night before the wedding I went out with some high school friends that just got into town. Another great night but probably not the best idea as Taj and I did not get to bed till after 4 am then were up at 930 to help decorate the reception hall. Let me just say that two hung over guys…or guys in general, should not be put on streamer detail. There was honestly a group of 10 trying to get these streamers to the bride’s specs. The bride’s uncle was on eyeball duty, telling us if the streamers were at the right height and what not. Taj and I kept yelling, “Hey Eyeball, how does this look?” and “Where the hell is eyeball?” when he would disappear for his frequent smoke breaks. Later that night talking to “eyeball” I noticed that he has a severely lazy eye….possibly even glass. Talk about party fowl but he seemed cool with it.

The wedding was great, nicest I have been involved with and I have to say we were one good looking wedding party! After the nice ceremony it was off for pictures then to the reception. I had such a blast as did everyone…chicken dance and all. Great mix of people including Aaron and Melisa’s families and high school friends. Another great, late night. I was so happy to be apart of it all.

The next day I was supposed to go to Folk on the Rocks, a great northern music festival, but going through 14 bottles of wine and countless shots the previous night, makes for a groggy day. I got up in time to hang out with Taj before he left and say congrats to the newly weds while watching videos from there big day.

The weather turned great here, could not have asked for a better weekend so I decided to stick around. Hopefully I can get some fishing and camping in. As I am writing this I am swaying in a hammock, relaxing in the sun listening to music. Life is still very good.