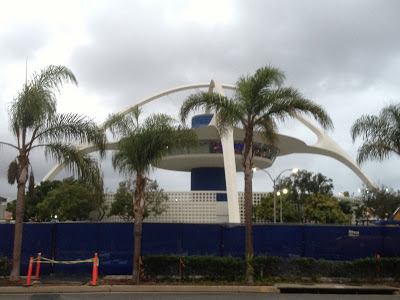 Even though the Crown Vic we stepped into was brand new it still looked like a 10 year old police cruiser. I didn’t realize they still made them, or at least for anyone other than the police and the elderly. Nevertheless

here we were at an LAX car rental company starting off our California Mancation with our choice between 4 colors. The new car smell would soon be replaced by golf shoes, farts, and an overall funk that may or may not void rental insurance. On the plus side other cars seemed to get out of our way as they surely thought they were about to get pulled over. This sweet ride was just the first of many high points (2nd if you count seeing the drummer from the Foo Fighters at the airport) on this 4 day trip of manly man-ness. For the second year in a row myself and two mates from New Zealand were in California for Football and liver punishment. This year we really upped the stakes adding 3 rounds of golf, a Lakers game and a 49er’s game in San Fran. Pretty ambitious for 4 sleep deprived days. 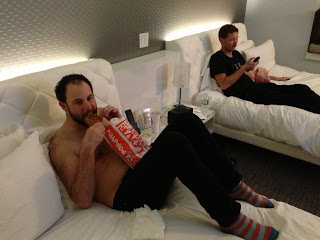 We arrived at or Priceline booked W hotel in Hollywood not knowing what to expect. Priceline fine print guarantees accommodations for 2 people which in most hotels means two queen beds. In some hotels, like theW in Hollywood, the cheapest room is a single queen with no room for a roll away bed. This has burned me before. Being that there was three of us I called ahead to try and sweet talk a room with at least two beds…no go, sold out. Not wanting to spend two nights sandwiched between two kiwis I somehow managed to get us upgraded into a suite. The girl on the phone however didn’t indicate if this was complementary or not. “You are aware of the $100/night upgrade fee right?” cautioned the check in host. I was not. I explained the situation, minus the fact that there was three of us as to avoid any additional charges. “We can get you into a room with 2 queen beds for no charge. Is that alright?” Absolutely  “I just don’t want to spend two nights spooning with this guy” I replied pointing to Glen while Travis hid in the bar. With that we were off to our swanky room in one of the coolest hotels I have ever stayed in. The place was more like a dance club with bed rooms. We would later come back to the hotel and find a bouncer and huge lineup to get into the lobby. Apart from the peek-a-boo window from the bedroom through the shower to the crapper, the place was great.

We cleaned up and headed out for a Friday night California Mancation in Hollywood. After walking Hollywood blvd for a few blocks we ended up at a college bar for ridiculously cheap drinks and surprisingly great pub food. Our waitress/actress was a fellow Canuck and filled us in on the places to go in the area. Awesome. After bar hopping for a bit we ended up at this cool little dive spot called The Piano Bar which was just that, a small bar with a tiny stage and an old piano. No cover or line and the band was amazing. Full up on cheap booze and great music we headed for a late night snack before getting a few hours of sleep before the real activities began.

After 30 minutes or so on the Highway 101 parking lot we were off to the burbs for some great golfing. Being that it was November and not overly warm outside we had the entire course to our selves. It was great and the course, Oak Quarry, turned out to be one of the most scenic I have ever played. California Mancation or not, I will be back to play this course again. 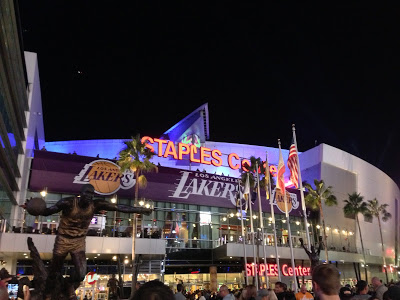 Many lost balls later we were back on the highway heading back to town for our night at the Staples Center. To prep for this we stopped at a Hawaiian BBQ place where we all had free $20groupon vouchers for. $20 gets you an alarming number of teriyaki pork ribs in the land of the free. Painfully full we ventured to Staples Center for our VIP (meaning we had a server at our seats…meaning it was dangerously expensive) The arena is very impressive however the game was not. Being a Celtics fan it felt sacrilegious being there. The off season addition of fellow Canadian Steve Nash and then acquiring Dwight Howard made the idea tolerable. Fast forward to Steve Nash getting injured 1.5 games into the season and Dwight Howard being a shadow of his old self and we had a boring and terrible team to watch. So bad so that their coach was fired a few hours before the game we watched. None the less the beer flowed and the experience was good.

Outside of Staples center there was a shanty town that I thought was some sort of protest. After the game I noticed one tent had a “Twilight” characters on it…then I noticed another…and another. Odd. Turned out to be people camping out for the screening of the latest film 2 days later. Weird. 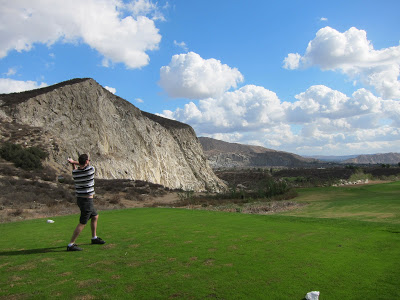 We managed to find a hipster bar in downtown LA before ending up watching another great band at the Piano Bar. This left little sleep for our trip north to San Francisco the next day. We broke up the drive with 18 holes half way. The course was no where near the quality of the previous day but we were golfing in November so not complaining.

Glen, affectionately known as “Dad” for his old man swing and driving us the whole way, took us to make out point once we got to the Bay Area. This offered us wide spread views of the city and unwanted advances from Glen.

Sunday AM we found ourselves having Bloody Mary’s for breakfast at a pub where people from all walks of life united for a higher power, football. It truly is a religion for most and not without its rituals. The tailgaters outside of candlestick park were fine examples of this.

Unlike the snooze fest in LA, this game was great. It went to overtime and resulted in a tie…there are ties in football?

More debauchery followed including horrible karaoke and getting “loaded” off of non-alcoholic beer at a strip club. Tip, non alcoholic beer, it tastes like vomit. It goes down like it too. 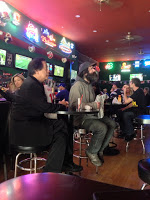 Our final day took us past Google and Apples hood in Silicon Valley to a posh golf club that we had no real purpose being at. Sleep deprived and looking homeless in comparison to the others there we rolled up 5 minutes to tee time and were off for a day of pretty terribly played golf. For me anyway. It didn’t help that Fred, the senior and club member we were paired up with, kept hitting and picking up my ball. At least that is what I am blaming my play on. 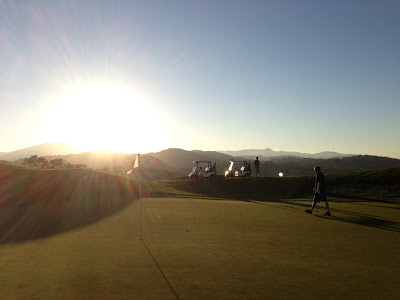 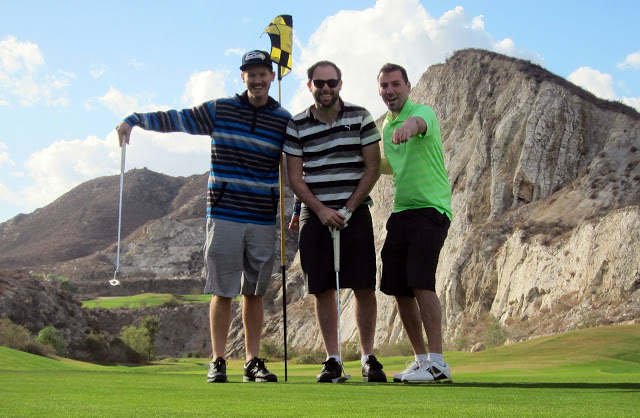 All and all a great California Mancation trip but not without its cost. I probably shaved a couple months off my life and was sick and off work twice in November. Worth it though. There is talk of Texas next year…steaks the size of toilet seats? Here I come.