By George, George by’

So fueled by a hang over and a moment of pure silliness I booked a last minute flight for Erin to come to St.John’s. We were chatting on msn and I joked that she should come for the weekend. It kinda escalated from there. 5 hours later we were on George st. Enjoying the end of summer street party. Like the George street festival, you pay $10 and you can walk bar to bar drink in hand. Such a great party and as it was the first week back to school the street was packed.

The next day we headed out to Cape Spear, the easternmost point in Canada…Actually, North America…over even the world! No wait, just North America. There is also Canada’s oldest lighthouse as well as some WWII bunkers. The scenery there, like the rest of the coast, is beautiful and the weather cooperated. After that we hiked Signal hill then dined on some cod. Erin had cod tongues which I sampled. I couldn’t get past the fact that it tasted like it was licking me. 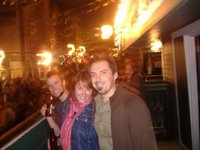 wine with Urs, a guy from Switzerland I had met the night prior. It felt like I was back at a hostel in Europe which is great. The 3 of us headed out to George street in search of getting screeched which is the act of doing a shot, kissing a cod and reciting a Newfie phrase that I still don’t understand. After that we had some white Russians at a bar that claimed to be the home of them then caught some great live music. It was such a great night and we met some great people.

The next day Erin was off to reality and I was left to enjoy a beautiful day in St.john’s. I did some much needed laundry then read in a park. That night Urs and I headed down to George street for the last night of the festival. Unfortunately theory of a dead man was playing on the street. No other bands in the bars played till they were down so we had to wait it out. It was painful and I felt like kicking my own ass for just being there. They are just that bad. We did end up at a cool bar that had one of the best bands I have ever heard. Ended up drinking with them and there friends. 3 hours of sleep and I’m up and on my way to pick up a rental car. Not looking forward to the drive!