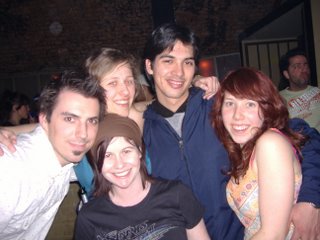 Busy Berlin
We have to figure out the train system here. Twice now we have gotten on a car headed for or destination only to find out that the car we where in branches off and goes somewhere else. On our way to Prague we found this out early and moved to the appropriate car. This time not so lucky. After a short detour to Naune, Germany (means middle of nowhere in English!) we arrived in Berlin. Our hostel was like staying in a high school..Complete with bad cafeteria food and kids! It was all we found on short notice and was a good location. 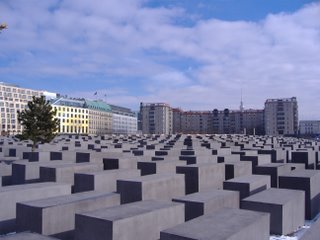 Learning our lesson from Prague and Munich, Jon and I decided to go on a Pub crawl the first night in Berlin as to avoid feeling bad the day we leave. Pub Crawl was alright, hung out with a cool guy form Mexico most of the night. Also with some girls from Belgium and New Zealand who where a lot of fun.

The next day was rough. The girls form Belgium came to wake us up for breakfast but that wasn’t going to happen. I slept most of the day, but at least there was no train to catch.

The following day we took an awesome walking tour of the city. I had no idea how much of the Berlin history (From Frederick the Great to Hitler to the Berlin wall) was based around a small section of town. Some of the highlights from the tour were standing on top of Hitlers bunker (were he supposedly took his own life), the memorial to the 20,000 or so books that were burned when Hitler took power, the memorial to murdered Jews of Europe, sections of the Berlin wall, and the memorial to lives lost in all of the hard times in Berlin. 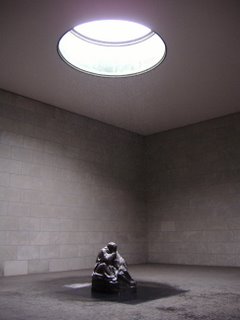 The monument to the books burned was very cool. On the exact spot where it happened, (very famous, I am sure everyone has seen black and white footage of it) there is a glass square where you can look down into an empty white room of bookshelves that can hold 20,000 books. Next to it is a quote from a book written in the late 1800’s which said something like “If they burn books, they will burn people next” (not word for word, I will find it out and update.) This book was burned as well. I tried getting a good picture of it but a group of students came through and I had to catch up with our group…Next time.

The memorial to the murdered Jews was very abstract. Jon and I actually walked by it wondering what it was. Basically a bunch of cement pillars in a city block. Place to think and reflect I guess.

My favorite memorial was the one the one dedicated to every conflict. It had changed over the years to represent different battles and conflicts but now is dedicated to them all. It was a statue of a mother holding her dying son in the middle of an empty room. Above, a hole in the ceiling is cut out at light hits it beautifully. It was snowing a little a gave it a very nice effect. Very moving.

Very good tour and recommend it to anyone going to Berlin…And its free. Tour guides work on tips.

Time is running out so I will sign off now. I will upload pictures again when I find a place that I can do so.