My aunt and uncle were camping in Nova Scotia so we decided to meet up for a week. The first day we drove all the way to Brier Island NS which is the birthplace 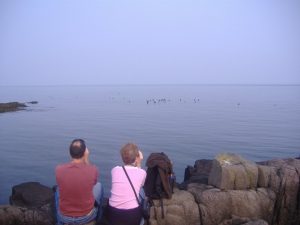 of curling. No wait…nope that’s not right. It is a small island at the mouth of the bay of Fundy. After some debating we decided to stay at a hostel on the island. My aunt and uncle had never stayed at a hostel before and were skeptical but it turned out great. Very clean and comfortable. The best part was the group of “birders” staying at the hostel. Brier Island is apparently an excellent spot for bird watching as numerous species migrate through the area. Great people but so odd to see someone so excited to catch a glimpse of a Tangerine tailed tickle piper. I made that up…the bird not there enthusiasm…you can’t make up that kind of excitement. Catch the fever! I did! My uncle got one of them going when he said seals evolved from birds. The birder didn’t find that so funny. To each there own and its great to be passionate about something cause if your not then your not really living. Deep.

We got up early the next day (but n 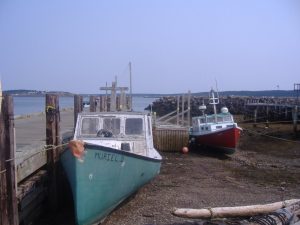 ot earlier than the bir 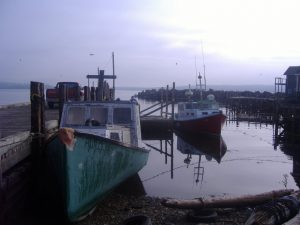 ders cause you know, the early bird…sees the birds?) and walked out to a place called seal cove which surprisingly has just that…seals in a cove. I was pretty excited to see a few seals in Newfoundland so this was great. After trekking through a true Nova Scotian bog, we had lunch at the hostel then were off on a whale watching tour. It was pretty cool 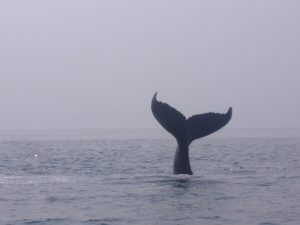 and the weather was great. We pulled up to a pair of Humpbacks and watched them dive and “log.” It made the trip seeing one of them come right up to the boat but then 15 minutes later we came across three more where one of them was very entertaining. He…or she…was whacking its huge tail on the water then continued doing so while “moon walking” backwards. Insert whale and small boy joke here. Ok so that made the trip but not to be out down, when we were heading back we saw two more that were “breaching,” once at the same time. It was amazing seeing thes   e huge whales jump out of the water and come crashing down. Very surreal and seemed like a scene out of Jaws. It truly was a great day. That night we went to a local restaurant to try some scallops as the area is known for them. The restaurant was out of scallops but everything else was good. Great day in Brier Island NS. Back down the bay tomorrow…