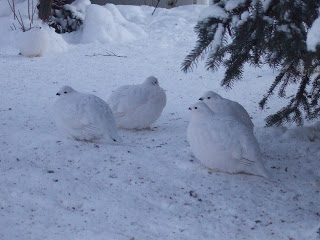 Ice roads and pink sunsets. Definitely a northern sight that loses its luster when you have grown up there. Sparked by the ridiculous documentary made about ice road truckers, we decided to go for a quick drive to catch the 3:30 sunset. After that we were off to bird watch. Erin had never seen or heard of a ptarmigan before. She probably saw a dozen or so last time she was in Yellowknife but mistaken them for clumps of snow. We managed to find some and walked up for a closer look. Erin was fascinated by there fuzzy feet and so was I. Years of seeing these birds and I never realized they had fuzzy feet. Apparently, they are the only bird to sport such an odd feature. As we watched them feed a bus holding many Japanese tourists pulled up. Erin managed to get in the 100 or so of the 1000 pictures they took as the bus briefly stopped. A tourist in my hometown getting in 1000 tourist photos. 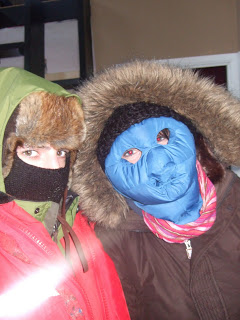 We also braved the -30 weather for some short-lived snowmobiling and kite skiing (minus the skies) My brother and father are into kite skiing and insisted we give the kites a shot. Bundled up like a creepy looking smurf, Erin gave it a shot. Turned out to be a lot of fun. Warming up

We warmed up afterward next to a wood fire and used an electric blanket on our legs to get the feeling back. (For some of my favorite ones see this article) It may seem extreme but it was well worth it for the experience we had that day!

And of course, whats a visit home without some home cooking? Here is out after Christmas, Christmas diner. OK maybe not really a tourist in my home town then.