Pretty much every weekend this summer Erin and I have had house guests…dirty, free loading house guest. Family or friends, its been a busy but entertaining summer. It has also made for a fat but tasty summer. Combine those and you have got yourself a pretty good summer. Here I thought I would share a couple of my favorite backyard summer time activities and eats:

There have been some epic games played this past summer. Games that have span the neighborhood. There has even been casualties. this ain’t your Grandpa’s game of bocce. 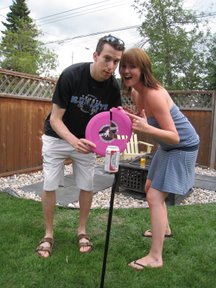 A classic. Some of you know it as beersbee but in my yard its Frisknck…Extreme Frisknockactually. For those of you unfamiliar with the soon to be Olympic sport I will break down the rules for you. First get yourself a crow bar and a sledge hammer ( I told you it was extreme) or anything you can rest a beer can on. Place these 2 objects with empty cans on top 15 feet or so apart. Put a cooler full of beer in between them. Separate in to two teams and let the madness begin. The object is to knock the opponents beer can down with the toss of a Frisbee (or be the last team standing). Drink as followed:

What makes the game extreme is there is absolutely no stopping. Thus the cooler in the middle for refills during play. Good times and DO try this at home…being responsible in your own way of course 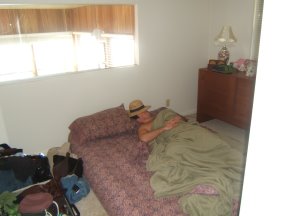 Oh baby do I enjoy a good nap. And I’m not alone, Eddision, Churchill, Kennedy and Regan are all famous nappers. Add my name to that list. A good addition to the backyard or fat man’s Olympics .You could make it a triathlon by combining eating and drinking. I would definitely make my country proud. 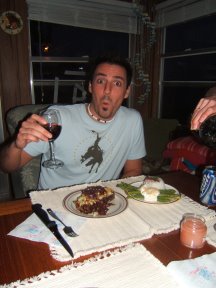 Good God they are tasty and easy to make. Erin and I actually had a half pond of bacon left over after having guests and made bacon wrapped water chestnuts for dinner…then Dairy Queen for desert. Back to the gym soon. In the mean time:

Soak the water chesnuts in the soy sauce for a hour or so. Wrap the nuts with bacon. Bake till bacon is done.