It was like Christmas in July for Erin. A Joyful Dani had arrived with several sacks of goodies. Erin had asked her to bring some of her stuff out of storage but didn’t know what stuff made the trip. Sadly, no lufas made the journey. 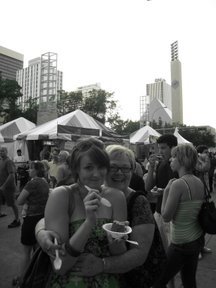 After putting Dani to work in the garden, (garden?) we took her for some local eats before spending then next day in Jasper. Sticking to my manifesto and wanting to show off what Edmonton has to offer we headed down to city hall where a Taste Of Edmonton was being held. This outdoor food festival showcases dishes from various restaurants from around the city. We loaded up on tickets and headed for the booths. In retrospect $60 was plenty for 3 people as we were stuffed after servings of green onion cakes, bacon wrapped scallops, and tempura. I couldn’t even finish my enormous serving of ginger beef which is probably a good thing cause there was nothing “beef” about it. You could fry a boot and put it in that batter and I wouldn’t be able to tell the difference. With several tickets to spare we headed for the wine tent. This resulted in an ice cream fight. Hilarity ensued. 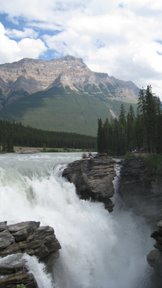 The next day was pretty relaxed however the next, next day was packed full of outdoor goodness. So packed that by the end of the day you couldn’t even squeeze a blade of grass in there. We got up at the crack of 9:00 am and made the 3 and a half hour trip to the Canadian Rockies for great day in Jasper Alberta.Dani and I talked the whole way. Erin slept the whole way. Hmmmm…

After a nice lunch at a great local bakery (The Other paw – Amazing black and white cookies!)we toured the shops of downtown Jasper and then headed to Athabasca Falls. The Falls them self are nothing to write home about. The crazy thing about them is the amount of glacier water that rushes through…plus the scenery doesn’t hurt. 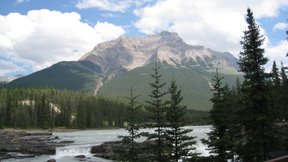 We then headed back towards town and took the tram up Whistler’s mountain for a nice view of Jasper and the Rockies. For those that are ambitious and in shape, at the top of the tram you can hike further up the mountain. “Let’s do it!” said an overly enthusiastic Erin. “It doesn’t look that far.” “Mmmmm hmm.” Replied a skeptical Shaun.

Less than 3 minutes up the trail Erin was swearing and gasping for air. “This is a lot worse than it looks” said a much less enthusiastic Erin. “Mmmmm hmm.” Replied Shaun. 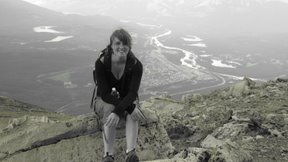 We made it about ¾ of the way up and took a rest. It is eerily peaceful on top of a mountain. All we could hear was silence…and Dani (whom opted out of the hike) asking an Asian tourist to take her picture.

We decided to dine in Jasper which meant a late night drive home.Even after our exhausting day in Jasper Dani and I talked the whole way. Erin slept the whole way. Hmmmmm…Are we boring? Pfffttt.

The next day was another peaceful one but included an expensive trip to Costco (Dani had a membership which we used to stock up on giant Olives and TP) and breakfast at Barb and Ernie’s which is a cute little German restaurant run by a cute little German couple. Best part about that place is they play their home videos of their vacations on TV’s in the restaurant. Nothing like eating a German pancake while watching a German tourist swim in the Indian Ocean or get changed in his hotel room. Priceless. 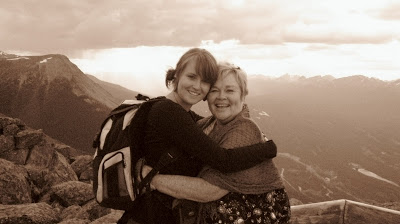 That afternoon Dani came and watched our volleyball game to which I couldn’t help but shout “look at me Mrs.Pongracz! Look at me!” Sadly we were rained (or hailed) out and had to head home.

Another relaxing night and then that was it for Dani’s visit west. It was clearly a great visit as she has already purchased her plane tickets for her next trip out. Pffft. And you were worried.