Toronto is a multicultural city with neighbourhoods arranged in honeycomb fashion—pockets next to each other, each one a little different. Toronto doesn’t have one prevailing character hanging over each quarter. People from all over the world live here, and different areas of the city can indeed feel like different worlds.  Only have 48 Hours in Toronto to explore? This is what we recommend doing and skipping!

First up on this list of neighbourhoods to visit with 48 Hours in Toronto is the downtown core. Between the waterfront and the financial district, is home to its most famous landmarks and plenty of accommodation options. The ones found on kitschy Toronto dollar store iconography, like the CN Tower and the SkyDome, even the relatively new Aquarium. These make it on tourist’s checklists because they’re known about before arrival. Fun can be had here, but they’re hardly the best way to enjoy and get to know the best of the city. 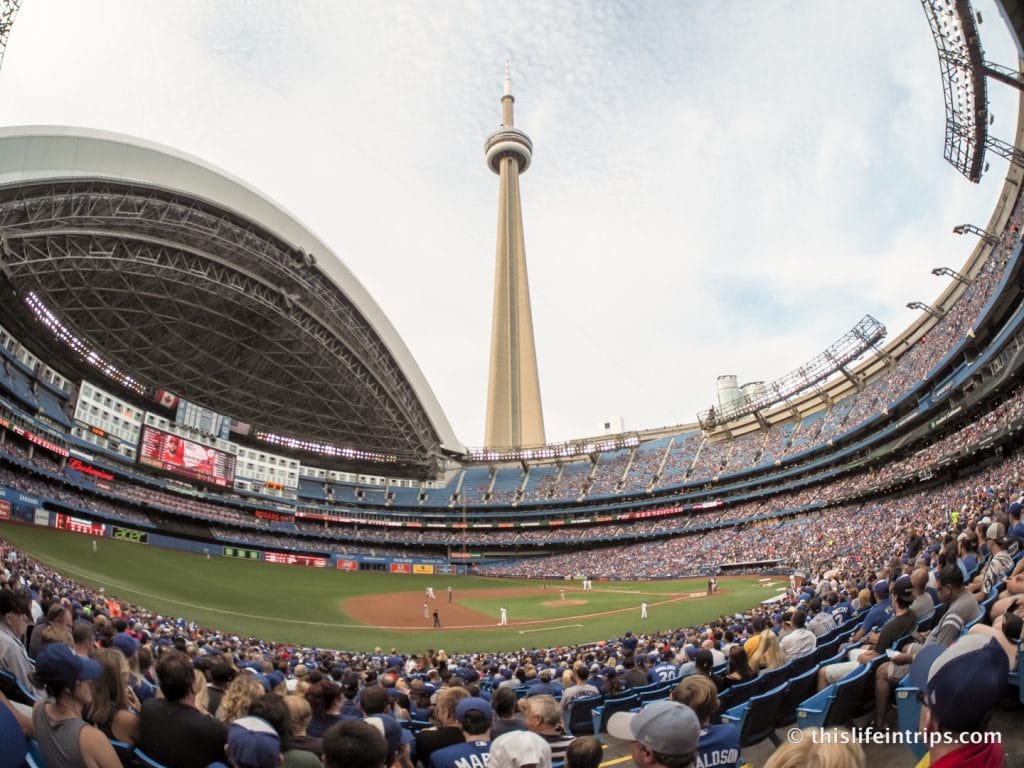 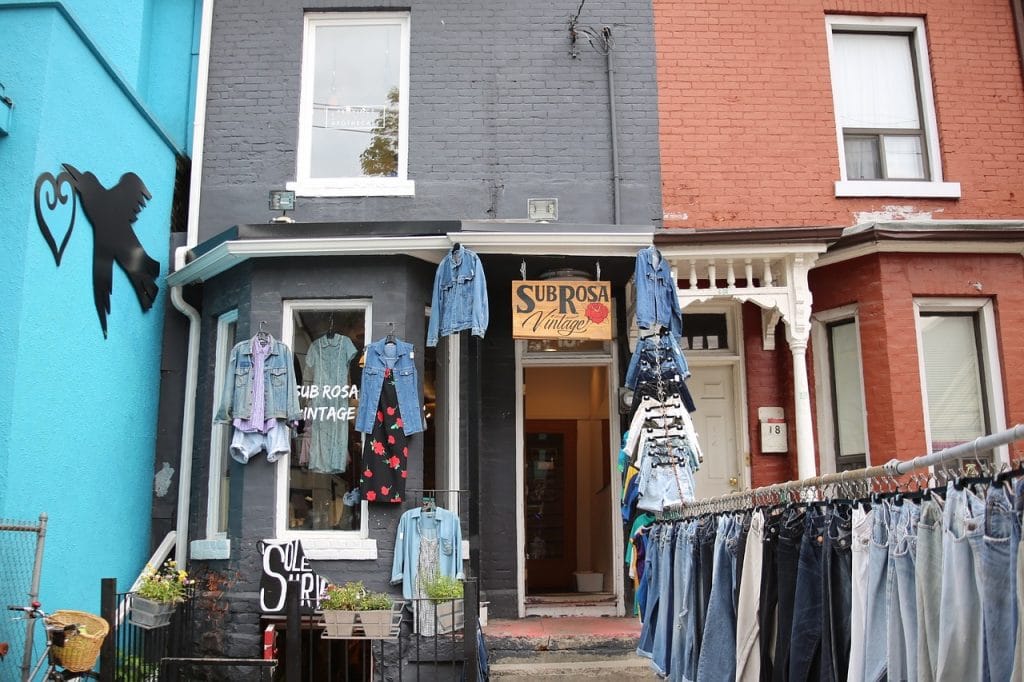 These are popular areas to wander and get lost in. Historically, this neighbourhood was home to immigrants, and it’s the last bastion of central downtown to resist gentrification. There are some quirky stores selling cheap wares. There are some fancier stores and restaurants, both in and around Kensington, but it still retains much of its old feel. It is an overtly multicultural area, both in terms of the makeup of its residents and the kind of foods on offer. There are cheap and unfussy places to eat, options like inexpensive tortillas from different South American countries, divine pepperoni slices, jerk chicken, dim sum galore, and more. There are fancier tacos and thin-slice ‘za too.

There are all kinds of stores selling vintage jeans, clothes from India, books on every topic, musical instruments. While there are enough bars and places to hang out, Kensington Market is better in the daytime. Unless you’re going to see a particular act in the market or in a nearby bar, say Grossman’s Tavern, it’s best to come here when the sun is still up to wander. Toronto’s character is most on display in Kensington Market. If you only have 48 Hours in Toronto or if you live there, tourists and residents both love it, for good reason.

It’d be a shame to come to Toronto without walking along Queen Street, only a few minutes by foot south of Kensington. Once on Queen, head west. It’s Toronto’s hippest street. It’s been commercialized to a fair degree, but it’s still filled with old-school haunts that haven’t changed much in years. The buildings itself are old, and the city is intent on preserving rows of two-storey Victorians. The storefronts are narrow and street life is as thick as anywhere in the city. Whether to walk or shop, eat or drink, it’s a cool and fun place to hang out.

Queen Street gets trendier the further west you walk. It was once home to Toronto’s wealthy, living in beautiful Victorians. Then they moved out and the area was poorer and grittier, but money is moving back in. Real estate was relatively less expensive, and younger people started opening up new businesses near Trinity Bellwoods Park and further west into Parkdale.

With 48 Hours in Toronto Trinity Bellwoods itself is amazing to people watch and hang out. People play baseball, ice hockey, Frisbee. They walk their dogs and enjoy a semi-covert drink. Walk down Queen to it, and continue past Dufferin Street to get to Parkdale proper. Small hip bars too expensive for many locals are filled on weekends as people file in from other areas. It’s the scene. Besides the cheap Tibetan, Indian, Vietnamese, and Middle Eastern restaurants there are trendy vegan restaurants and taco joints.

Want to learn more about exploring this area, the writer of this post, Jared, from Out Here Travel posted a long blog post dedicated to exploring Ossington and beyond. Without jumping out of the article, one of our favourite spots for a night out is the Gladstone hotel where live karaoke is happening!

A bit of walk from West Queen West, but it’s got a completely different feel. More family-oriented, and wealthier. The homes are gorgeous, but it’s a welcoming relaxed place. High Park is shockingly large and gorgeous section of nature in the middle of the city. A walk through here is highly recommended and a primary reason to venture this far west.

Next up on this 48 Hours in Toronto list is the locally loved Little Italy and Little Portugal. Just to the north of Trinity Bellwoods, walk along College Street to Little Italy. There are chains where old independent businesses used to be, but it’s a charming strip of town that is sometimes closed to cars so people can wander around the streets, eating their faces off. It’s hard to tell where Little Portugal ends and Little Italy begins, but it doesn’t really matter. There are great restaurants and people enjoying fine weather with a drink on the patio.

If you really have money to spend or want to see the people who do, there’s nowhere else to go but Yorkville. This is the poshest area in Toronto, and probably in all Canada. International luxury brands like Prada and Louis Vuitton reside here, and there are local designers too. Even the sidewalks are ritzy! Wide and made of granite along Bloor Street. The high-end stores have their restaurant counterparts. You may see a player from the Maple Leafs or the Raptor, or perhaps a Hollywood actor. Many movies are shot in Toronto, which often passes on-screen for American cities like New York or Chicago. 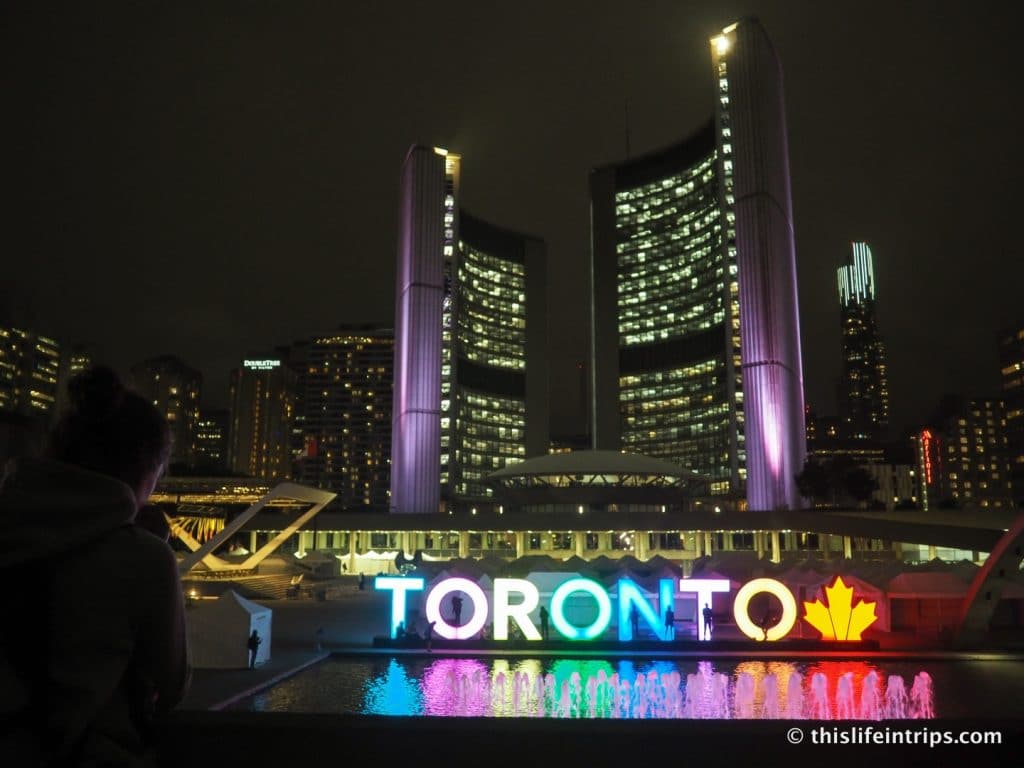 There are potential recommendations scattered all over the internet and guidebooks that you should actually ignore. These include Dundas Square and the Eaton’s Centre. Dundas Square is a mostly vacant section of concrete. Sometimes there are concerts, but it’s mostly filled with loiterers and demonstrators surrounded by obnoxious lit up advertising.

The Eaton’s Centre is just a giant mall. It can be useful if you need to buy something, but nobody can claim to have contacted Toronto by merely being inside this place. The “Entertainment District” is filled with tourist-priced eateries and clubbing at night. They’re OK if you like that sort of thing, but there are many better lounges and bars scattered around the city.

East along the Danforth is great too!

Last up on this list of neighbourhoods to visit with 48 Hours in Toronto is the eastern corridor. Just take the one subway line that goes in that direction east to Greektown, or even further along. It gets less attention from outsiders and even Toronto residents. While it has been injected with fancier businesses in places, it looks and feels more like Toronto did in the 90s, even the 80s. There are old fish and chips joints, Ethiopian, Indian and lots more. Perhaps because it gets less attention from tourists and city blogs alike, it feels more community-oriented. The people you’ll see there do in fact live or work here.

Toronto has a lot Going for it as a Metropolitan City 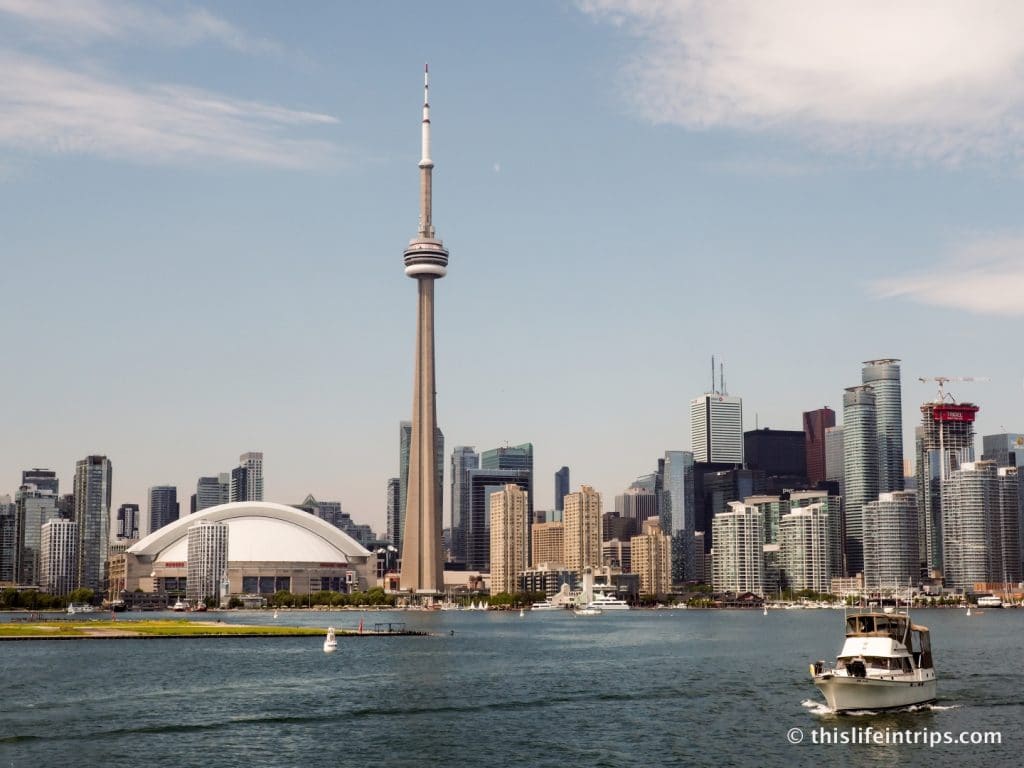 It’s safe and clean and people from the world live here in as much or more harmony than anywhere else. It is sometimes culturally insecure and embarrassingly desperate to think of itself as a “world-class city.” It’s not Rome, Paris or New York, but people love to live here and visitors, even those only here for a day, are sure to have a great time.

This post is brought to you by Jared, founder of the Canadian backpacker adventure trip company, Out Here Travel. Interested in a multi-day trip across the central & east coast? Check them out! They also have tons of other Canadian content on their blog.

What say you?
Thoughts on these hoods to visit with 48 Hours in Toronto?
Let’s hear it! 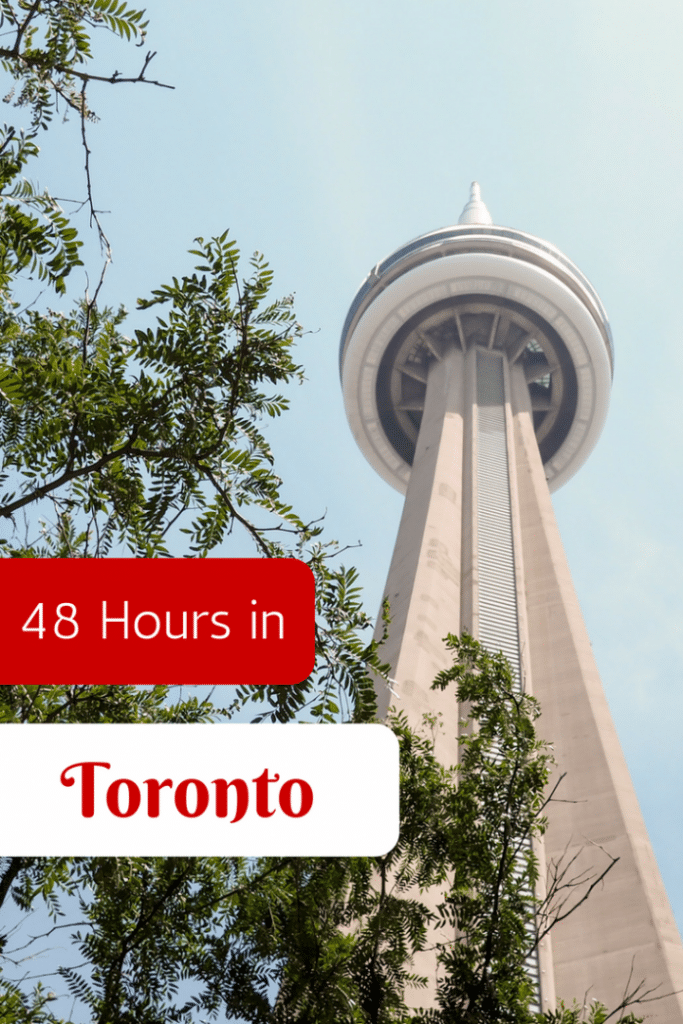 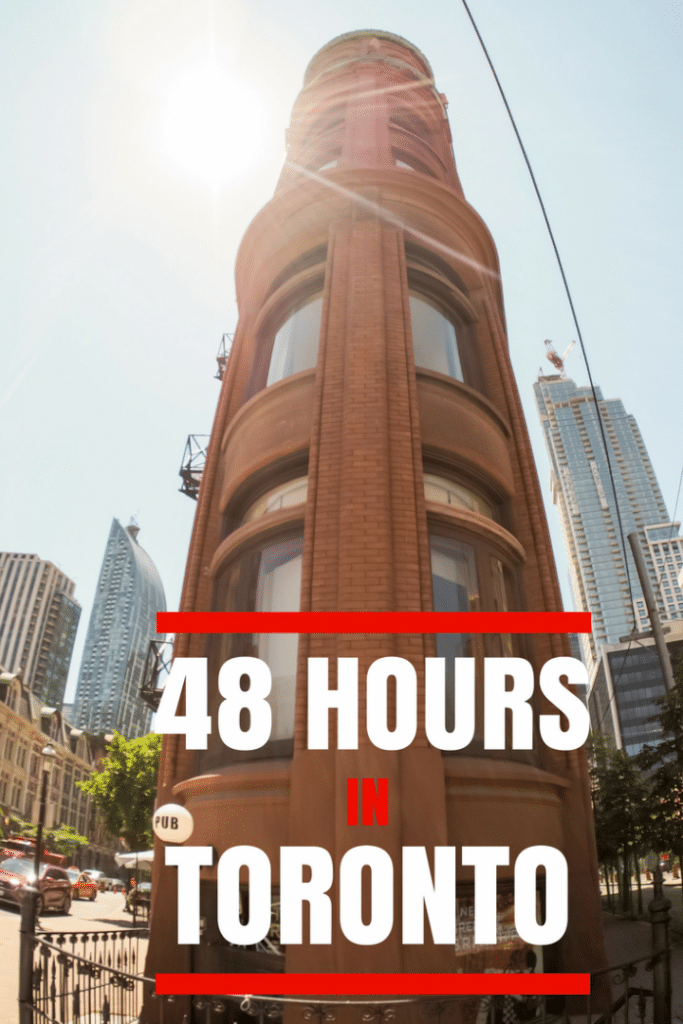