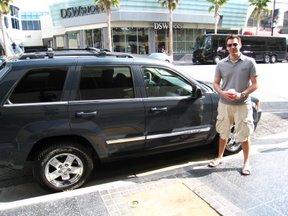 I apologizes, I apologize I apologize. Tardiness is not tolerated in your work place and it should not be tolerated here. So to you my two or so loyal readers, I am sorry. Things have been pretty busy for me since getting back from the birthday road trip however not in a crazy trip sort of way. Think domestic. Think home Depot and garden gnomes. Not that there is anything wrong with it but settling back into home has consumed a lot of free time. Will save that adventure for another post. This post picks up while spending 48 Hours in LA. 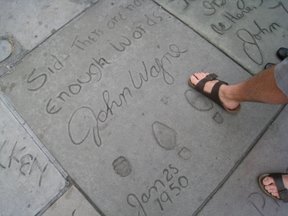 Justin, Alison and I had just gotten up in our 4 star hotel on the sunset trip. The hotel, another great find on Priceline, was tres swanky and perfectly located. I was up and giddy. Not giddy because I was off work for over two weeks nor because I was in the heart of Hollywood. Nay. I was giddy because I was about to meet my new Jeep for the first time. Let me just say right here and now, buying a vehicle in the states is not nearly as hard as you may have been led to believe. Not only was it an easy transaction it saved me 10 grand in the process and I had it delivered to the hotel before we even got there. I gave my ticket to the valet attendant and waited anxiously as if I were meeting a blind date for the first time. Will she be as beautiful in person as she is in her picture? Will she be easy going and fun or difficult and high maintenance? These questions were quickly forgotten as the valet pulled her around the front door. “She looks glorious!” I said with a smile and a man tear. Thus with that “Old School” reference, my new Jeep was named “Blue” 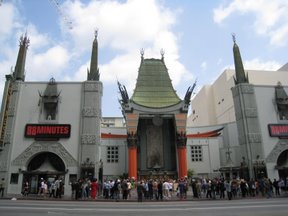 After a few minutes of getting acquainted we took Blue down Sunset Boulevard to the Hollywood walk of fame…which we walked. It was definitely one of those places that is a bit surreal to be at, one of those places that you see on TV all the time and now your there.  A great way to start our 48 Hours in LA. It was pretty neat and fun to see the names of Hollywood heavy weights encased in cement. I had heard that most celebrities are surprisingly small but most of the hand and foot prints were freakishly small…like garden gnome small. (What’s with the gnome references?)

From there we took a drive through the hills of Beverly. We gawked at the over sized and outlandish houses before making our way to Rodeo Drive to gawk at where the occupants of those houses shop and drink $12 lattes. A short drive later and we were on Santa Monica Beach. We spent a couple hours taking in the sights on the pier and beach. There is defiantly something for every type on the beach. Outdoor chess tables, volleyball courts, basketball courts, bike rentals, yoga mats, man-sized jungle gyms and of course a huge beach. 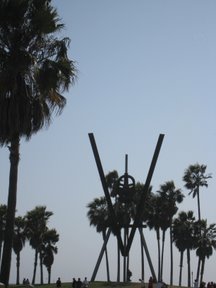 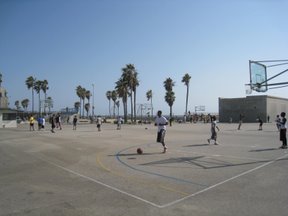 We headed south to Venice where we found plenty of action…like this guy for instance:

We walked and walked and walked some more. Venice beach goes on forever! Once the shops and freaks started to a look the same we decided to call it a day. More fast, greasy food and then some live comedy. Our hotel was conveniently located next to the famous Comedy Store, an incredibly funny place owned by incredibly unfunny man, Pauly Shore. The show was pretty funny but Justin’s heckling made it that much better. After awhile the new comedians hitting the stage knew him by name before even getting to there act. Too funny. 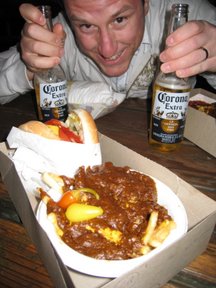 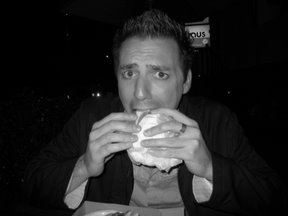 The next day my foot felt like it was broken. This was not funny especially since it was only day #2 of my trip. Definitely not on the 48 Hours in LA itinerary.  Like a champ I forged on as we reluctantly and blindly made our way to the CBS studio in Studio city. I say reluctantly because we had free tickets to the Price is Right however it was an 8 hour tapping and we were a bit hung over. I say blindly since we were reluctant to go we did not have the address of the studio so we just got in the Jeep and drove. A confusing and somewhat hectic (Shaun’s first experience merging across 6 lanes) 30 minutes later and we found ourselves at the wrong studio. Turns out the one we wanted was a 5 min drive away from out hotel. By the time we got there the lineup was around the block. Over a greasy breakfast we decided to pass on the show. I opted to go and find a doctor to get my foot checked out and Justin and Alison decided to head up to Malibu. 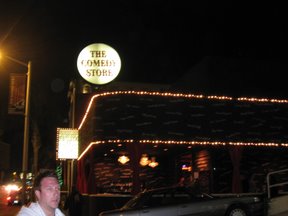 This clip was taking after a dodgy 5 hours which I had to wait for the doctor to get back from a 3 hour lunch then waited 2 hours to get an x-ray in a dirty x-ray/coffee room. American health care at its best. This place was actually recommended by my hotel. It was in a run down building adjoined to a “message therapist.” I decided to try getting a foot rub while I waited for the doctor however I am still unsure of what type of massage therapy they do. My foot hurt that bad so I was willing to try anything. After a confusing conversation with the receptionist about just getting my foot rubbed I paid and nervously waited in a room where I was told to get naked. When the girl came in and saw me fully clothed she was very confused…as was I. I tried to explain that I just wanted my foot looked at but was not getting through. She called in another girl and they both inspected my foot like it was an alien limb. After a conversation in some language that ends with “nese,” the girls turned me away. 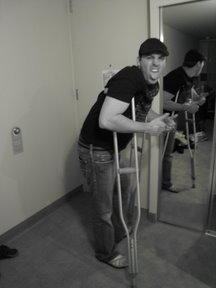 Diagnosed with a severe sprain I was given crutches and sent on my way. After more fast fried food we made our way to the famous Whiskey A-go-go. The bar was much smaller than I thought but just as scuzzy. We got to see 5 or so bands rock out on the same stage that bands like The Doors and Motley Crue got their starts on.

After way too many a Jager bomb we called it a night and a blurry finish to our 48 Hours in LA.