Funny thing happens when you stay up for close to 2 days, cross 8 times zones, then sleep for 2 hours on the short hop from China to Vietnam. You get dumb. You get disoriented. This is not a good thing when you have to deal with customs and visa’s in a very foreign land. Note: Do not try and pay a Vietnam visa fee with Hong Kong money and pocket lint. After struggling our way through what was at first a very strict procedure then suddenly became a shrug you shoulders and don’t worry that you put your last name where your place of birth field is and your passport number is missing kind of procedure, we were on the streets of Saigon, honking our way to the hotel. Our start to our 48 hours in HCMC was hectic to say the least. 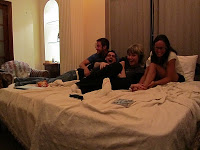 Another note on Vietnam customs: When Justin and Allison went through they did not know they have to cash to pay the entrance fee so they were allowed to go to the ATM machine to get money out. The ATM machine is located outside the terminal….past customs…past the luggage area…in Vietnam.

After paying 3x as much as we should have we safely arrived at our very nice hotel. (Thank you Hyuinh’s for the tip.) In our room we were re-united with Justin and Alison Winnington/Boyd. For those not close to me our new to this blog, this is not our first trip with this couple. Vegas, San Fran, Sasquatch, Punta Cana…all great times. Some bordering on self control but all great times.

Justin and Allison (From her on referred to as Jalison…in an order to save internet time and put more Dong in my pocket) are lucky enough to be circling the globe. They have been off work ad traveling since July of 2009 and are now on their 4th continent, X country and Xth t-shirt (more on that later) I am very jealous of their trip but am very happy to be apart of the tail end of it. JB said he was inspired by my trip in 2006 (4 years ago!) so I can’t hate that much. A night of catching up and drinking ridiculously cheap drinks followed. With 25-50 cent beer, this trip could be interesting.

With only 48 hours in HCMC we decided to book a private driver to take us to Cu Chi so we could tour the Viet Cong tunnels. After a breakfast that consisted of Pho and iced coffee we were off, once again paying way too much for the ride. The drive out of town was an experience on its own. The amount of scooter traffic is undesirable. I stopped counting at 4700. When I asked our driver where everyone is going he simple said “around.” That solidified my theory that they all drove and slept in shifts. The rules of the road are as confusing as the crosswalks. From our drive out to Cu Chi we found that the car with the loudest horn usually got the right of way…usually. 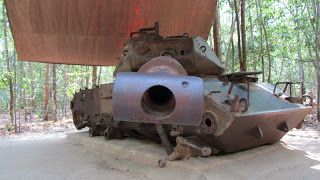 Cu Chi tunnels are a fascinating glimpse into the life of the people living in the area during the war. Pride of their amazing accomplishments is very evident throughout. At the beginning of the tour we were shown a film that boasted many top fighters that were awarded “#1 American Killah hero.” Our guide continued this theme as with each demonstration of a bamboo trap a joke was sure to follow. The best (and worst) came after showing us a swinging door trap that attacked the lower abdomen. “Maybe he become lady boy and move to Bangkok.” These jokes felt like they were in very poor taste as many American soldiers died in these very same spike filled traps however living in North American we don’t always hear the other side of the story. These were people that were hunted and heavily bombed repeatably by a force with not only superior technology but technology in general. These people fought with sharpened bamoboo and won. They destroyed tanks with land mines built from American bombs that didn’t go off. They walked with sandals made from American Jeep tires. They made barbed spikes melted from scrap metal. They Shot guns acquired from the enemy. All of this while spending most of their time underground and not just a little underground. Craters left from B-52 bombers illustrated just how deep they had to go. A truly amazing accomplishment and definitely something to be proud of. 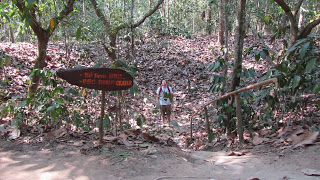 After seeing the various tools and traps used we were able to shoot actual guns and bullets from the war. Thoughts of jammed bullets and misfiring shots filled my head as the beer drinking gun “marshals” handed us worn out ear protection that was no more than a pair of airline headphones from the early 1980’s. Justin was up first and shot one of the larger and louder AK-47. The sound was piercing. I opted for the automatic M-16. Partially because I had shot AK-47’s before and partially because I wanted it over as fast as possible. It ws my first time shooting an automatic riffle and I have to say it was an exhilarating experience. The adrenalin was flowing after I squeezed the trigger and fired 8 shots in the blink of an eye. Truth be told I may have been a little aroused. Boys are weird. 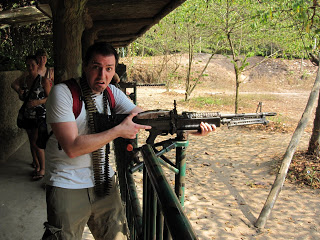 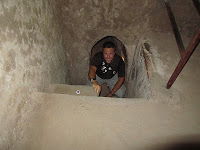 Once my inappropriate display of excitement subsided we moved on to the actual tunnels. Justin and I barley fit and had to crawl hand and knee for most of the short distance we went. My knees burned from supporting my North American frame. Once out we were sweaty, dusty and disoriented. That was only 300 meters. These tunnels go for miles. Upon exiting we were told that the tunnels were enlarged to accommodate tourists. An incredible feat indeed.

After another white knuckled drive we were back in the city. We headed for Ben Thanh market. Once there we stopped for Pho to fuel up before getting our shop on. As we dined on our second helping of Pho for the day we watched as the market doors closed. Not to worry, it would not be the last market we would see on our trip. We walked district 1 and took in the various sites, sounds and smells. We drank curb side beers in front of Duc Ba Cathedral and made friends with some colorful locals. 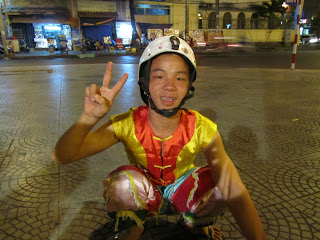 That night we indulged in the tourist friendly price of booze. Stupidity issued. This was highlighted by shot-gunning Birdy, a cold coffee drink. This was chased with Golden cow, a Red Bull knock off energy drink. Boys are weird.

That night I could not sleep. Chalk it up to a combo of jet lag and the ridiculously vast amount of caffeine consumed. Restless at 5:00 am I headed out to do some writing and grab a not needed at all Vietnamese coffee. Justin woke up and came along.

We got as far as the corner of our street when the scent of street meat took over. Powerless to its aroma we attempted to oder two skewers. Instead we ended up with two large bowls of vermicelli topped with pork, spring rolls and, fresh vegetables. All for under 60 cents. Breakfast of champions. Great way to start the second half of our 48 hours in HCMC. We sat and dinned at the traditional tiny table and chairs and watched the endless stream of scooter drivers watch us eat their breakfast. These type of vendors are on every street. The great thing about them is they are not catering to tourists. They are a part of Vietnamese life style so you know it is a safe bet…even though the pictures may suggest otherwise. 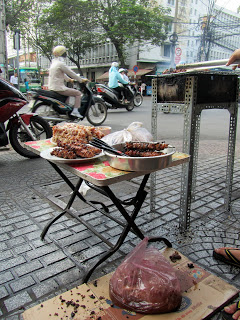 Stuffed from possibly the best breakfast I have ever had we made out way to a museum on the Vietnam War. Much like the closing of the market the day before we managed to arrive just in time for the museum to close for lunch. We were allowed to spend 15 minutes wandering the halls which was plenty of time to read about the crimes committed by the Americans during the conflict. The pictures and stories of the still present effected victims of Agent Orange used is sickening. A tribunal in Paris last May outlined the crimes and found that $1.52 billion a year is to be awarded to the victims.

After a very sobering look at the countries somewhat recent past we made our way to the airport for a quick hop to Siem Reap, Cambodia. Did I mention we were going to Cambodia?

As you can see you can pack a lot into 48 hours in HCMC if you want. This includes street meat of course.