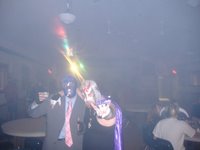 So I know its long past but I thought I would share some pics from a very blurry night. We ended up at a hall party that was by no means “jumping,” probably due to the blizzard that was going on outside. That didn’t stop us as there was a twonie bar and free food to be had. One thing I vaguely remember is knocking tuna sandwiches out of Jon’s girlfriends hand and stomping them out like they were cigarettes. I think I thought they were tainted so every time she grabbed one I would “put it out.” Vodka does strange things to Shaun. 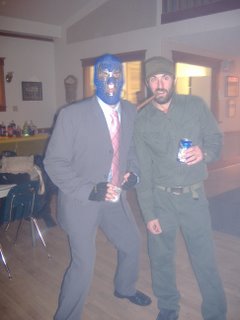 To make the night more interesting I got us lost on the way home. The party was about 6 blocks away and we walked 12…in a blizzard. I even wiped out and twisted my ankle which is still sore to the this day. Dumbass.

The following week I was off to Ft.McMurray for work. It was my first time up there and was fun cause I got to see my friends Justin and Alison. I stayed at there place and was shocked to find traffic jams that made a 5 min trip take 35. Rush hour in Ft.Mac, who knew? Another thing that got my attention was the “hun” and “by” that where flying around everywhere I went. Ft.Mac is Newfoundland’s second largest city. For you that don’t know, Ft.Mac is over half the continent of North America away from Newfoundland land.

On the way home I took the force plane to Ft.Chip for another job. Flying back I realized that this is pretty cool and remembered that this is what I enjoyed about my job.