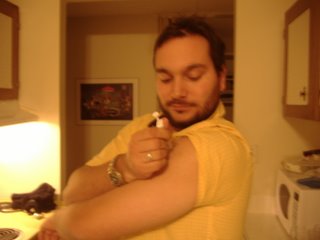 Something To Write Home About

I have been trying to live by my manifesto and am happy to report that things are going good. As you can see by previous pictures I am cooking a lot, I have played an open mic, and have been drinking cranberry juice like it was beer. My prostate could not be happier. Most importantly, I have said yes more. I have agreed to do things that at first I didn’t necessarily feel like doing but then end up enjoying it. So when my brother asked if I was free on the weekend for a mystery trip, I could not say no…even though I’m broke.

I spent all week on the road in southern Alberta for work. Scott said I needed to take Friday off and be at the airport by 4:30 on Thursday. So I was racing around trying to get my work done. It didn’t help that I stayed with my friend Shayne in Lethbridge, it made for a couple rough mornings. For those of you that don’t know Shayne, he can be a bit of a character. For those of you that do know him, you know that he can do some stupid things. Here he is administrating himself the flu shot. Apparently you can buy them now and bring it to your doctor. Doctor Schmocktor.

Anyway, riding a sugar high from 5 too many Krispy Kreams, I made it back to Edmonton in time to pack and meet Scott at the airport. “So, Where do you think we are going?” he asked as I pulled up a seat at the airport Tim Horton’s. “Well, I originally thought Vancouver based on the time period and what you told me to pack but then you asked me to bring my passport so I dunno…Seattle?” “No” he replied as he handed an orange pill, ear plugs, and some foreign currency which I soon recognized as the British pound. “Where going to London?!!?” I questioned. “Were going to London.” Scott smiled. “For the weekend.”

And we were off, well not quite. Scott has a membership to the first class lounge so we had more than our fair share of pre-flight cocktails…you know, to help us sleep. We stumbled to our gate and then we were off. 8 hours later we were in London.