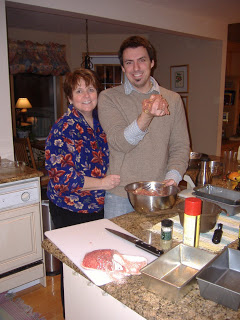 What’s more manly than meatloaf? How about meatloaf at -40…..outside of course.

I was in Yellowknife working and had made the mistake of mentioning to Al that I had (once) made a meatloaf that was fantastic and, dare I say, better than his. This was, understandably, somewhat of an insult to Al and so he challenged me to a loaf off. I manned up and accepted. 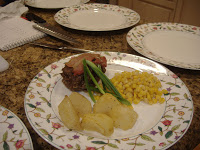 Now the reader should understand that I have made one (mouth watering, meaty and delicious) loaf in my 26 years of existence. Al on the other hand has been perfecting his recipe since the beginning of time…or at least for decades. Although I was a clear underdog I was confident in the one loaf I had made, nay, created. Plus I am not one to back down from a challenge. 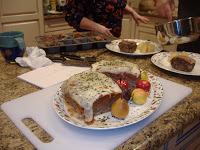 Al graciously gave me the kitchen first. I prepared my ingredients with care as I was barraged with constant heckling and “meatloaf” trash-talking. I finished up only to find Al had per-prepared his earlier that day. His loaf’s were a thing of beauty; individual mini-loafs topped with bacon. Mine? A thing of indigestion topped with 2 inches of my secret “ass kicking” crust. I was in trouble.

The judges arrived and broke down the scoring to presentation, taste, and originality. I was clearly in trouble with the presentation as Al finished off his already impressive eye feast with fresh scallions. I topped my crusted brick with shredded cheese and dried parsley which wasn’t far off from smelling like fish food. It would have to come down to taste.And so we ate…sorry…gorged.

Al’s meatloaf not only looked great but was very tasty as well. I was sweating. No, not because his creation was very impressive, because my loaf was spicy and chalked full of meaty goodness. It had the kind of spicy sensation that slapped you in the face and because it tasted so good, you became powerless as if to say “thank you sir, may I have another?” It was mouth watering. The meat to testosterone ratio (or M.T.T.) was dangerously close. In other words, my meatloaf was the balls. 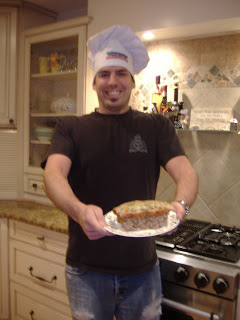 Now its safe to bet to say that I’m being biased but that’s what the judges were for…and the judges agreed. With a score of 50-45 my meatloaf reigned supreme. I was in shock as things did not look good when Al presented his dish. I guess I just wanted it more. In the end my spicy crust unleashed the awesome powers of beef and warmed the hearts of the judges. Just goes to show you that meat really can change people. Later that night we would also find that my meatloaf unleashed the awesome powers of indigestion, thankfully hours, (if not minutes) after the judging finished.

Victory is a dish best served with chocolate cake…which we had after dinner. We then joked about having meatloaf and eggs for breakfast and how gorse that would be.

The next day we had meatloaf and eggs for breakfast.