Last summer I took a train trip so incredibly Canadian they named the journey after it. VIA Rail’s The Canadian train is the train passenger service between Toronto and Vancouver. Not only is it the only way to see the country by rail, but in doing so you are covering the very tracks that united the country over 150 years ago. From a sea of endless green fields to the Canadian Rockies, the trip is as diverse as the country it crosses. It’s also something I have wanted to do for a very long time.

Although the trip itself did not disappoint, VIA Rail’s description and specifics about The Canadian train did. Prior to leaving, I found it difficult to find practical or clear information about The Canadian. This is surprising given the cost of the trip and its popularity. Fast-forward to being on the train and I picked up a few things that would’ve been good to know ahead of time.

With that in mind, here are 10 things VIA Rail doesn’t tell you about The Canadian train but should.

1) VIA Rail Doesn’t Own the Tracks

First up on this list of things VIA Rail doesn’t tell you about The Canadian train is a big one. VIA Rail does not own the tracks it rides on. This may not sound like a big deal however because CN Rail, Canada’s freight line, owns the tracks it means VIA has to give way and stop for freight trains…a lot.

This means frequent stops and delays giving no consistency to the schedule. On my departure, for example, we were delayed over three hours. This is not uncommon.

2) Don’t Expect to Stretch Your Legs

Again, due to the inconsistency in the schedule, stops are not reliable. On top of that, The Canadian train is very much about getting from A to B. The only stops of any significant duration are in Winnipeg where the crew changes, Edmonton where the dome car is added, and Jasper. Even these stops vary in duration depending on how late the train is running.

If you are travelling in a private cabin for one, you might want to know ahead of time that your bed folds down on top of your private toilet. Gross right?

During the day your bed converts to a bench seat…next to your toilet. If I booked this cabin I would be disappointed. Considering how much more they are than the upper and lower berths, this is nice to know if on the fence.

4) Berths are in the Hallway

That said, you may want to pump the brakes on the upper/lower berth options as well. It’s not super clear on the VIA Rail website but the berths are in the hallways. This means anyone can pass by, day or night. I did not realize this until flipping through a pamphlet on my train ride from Kingston to Toronto where I was catching The Canadian train.

On the positive, I am happy to report that with the curtains drawn, the berths are actually very private. They are also very cosy. I would not hesitate to book this class again if travelling alone. It’s better than sleeping on top of a toilet!

6) There is a Reason Upper Berths are Cheaper…

Before you decide on the cheaper upper berth versus the lower be warned, there is a sneaky reason why they cost less. The upper berths do not have a window. I’ve heard this can make for a claustrophobic and disorienting journey.

There is, again, no mention of this on VIA Rail’s webpage. The best you get is this vague picture where the guest on top is blocking the window. This makes it unclear and somewhat misleading.

I travelled in the lower berth and thoroughly enjoyed (as does the lady in the picture above!) pulling back the blinds each morning to see where in Canada I was. I would not hesitate to pay more for this feature.

Although annoying, this was not that big of a deal and I managed to find power when needed. This is how I came to know about the “toilet single sleepers.” I spent a few hours with my feet up on the can while charging my devices and batteries in an empty cabin. The bar cars also have outlets.

This next one is more a tip and less something be VIA Rail doesn’t tell you about The Canadian. You should 100% shower when during stops. If this wasn’t self-explanatory, this is strictly for comfort and for a less comedic showering experience. Since the train stops frequently (see point number one) this is not a problem.

8) The Panorama Car gets Added/Removed in Edmonton

Something that is not evidently clear is the well-advertised Panorama Car is only available for the journey through the Rockies. It is for unobstructed views of the mountains and removed, I assume, to save on weight which I get. It just isn’t clear ahead of time so don’t expect to travel like this the whole way.

On the positive, I found the Skyline and Prestige Park Car (which are attached the whole way) offer a better viewing experience because they are higher up…and serve booze.

9) Sleeper Plus Class can Access the Prestige Park Car

This one is listed on the VIA Rail‘s website but again, not super clear. If you purchase a Sleeper Plus berth, which is essentially budget class plus a bed, you not only get meal service and access to the dome cars but you can enjoy the swanky Prestige Park Car. This bar car is far superior in service than the Skyline Cars and also has an upper-level dome car with comfortable seating.

I seem to recall that Sleeper Plus passengers can only access this car after 2:00 pm. I tried to verify this through the VIA Rail website on The Canadian but came up empty. Kinda hits home why I am writing this post!

Last up on this list of things VIA Rail doesn’t tell you about The Canadian train is, simply, that it’s the only company to offer cross-Canada passenger service by rail. Why am I adding this to the list? Knowing this ahead of time may sway you on the high price. I know it did for me.

Bonus Tip – Be Flexible and Save!

Most of these points may come across as negative but I have to stress that although The Canadian train is not a perfect service, I had an incredible journey and will definitely be doing it again. I will be following up with a post on my unbiased review of The Canadian so be sure to check that out if you are on the fence about taking this uniquely Canadian trip!

Till then, if you are looking to book a trip on The Canadian train try and be flexible. VIA Rail comes out with new discounts every Tuesday and you can find Sleeper Class Plus fares deeply discounted on specific routes and, if lucky, between Toronto and Vancouver.

What say you?
Thoughts on what VIA Rail Doesn’t Tell You About The Canadian train?
Let’s hear it! 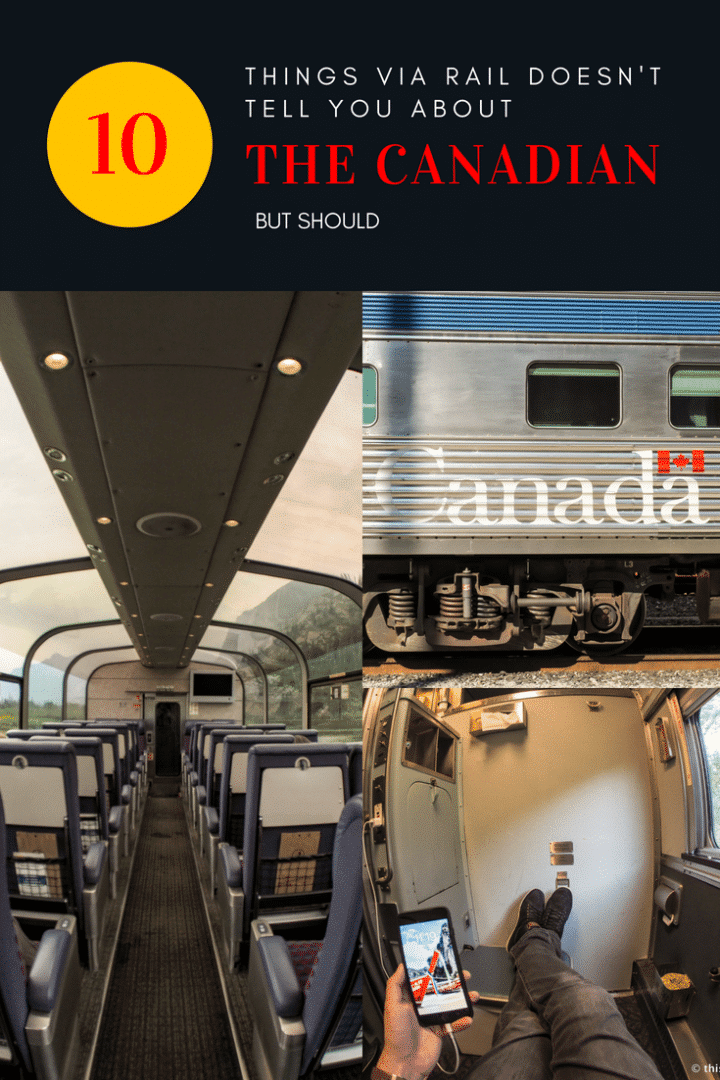