10 Awesome Things to do in Prague

The capital city of the Czech Republic, Prague is also affectionately known as ‘The City of a Hundred Spires’, a nod to the rich architecture found in what is often said to be one of the most beautiful cities in the world. Having emerged out of the shadows of the Communist regime and the Cold War, Prague is now an eclectic mix of culture, cafes, cathedrals, ancient monasteries, beer halls, and much, much more. Although there are many things to do, I have picked out 10 Awesome Things to do in Prague that are sure to inspire!

Do not miss Charles Bridge. It tops this Awesome Things to do in Prague list for a reason. Originally called the ‘Stone Bridge’ or the ‘Prague Bridge’, the Charles Bridge was constructed in 1357 and crosses over the Vltava River that bisects the city of Prague. The bridge provides a crossing between Old Town and Prague Castle and features statues of over 30 saints including a sculpture of John of Nepomuk who was thrown into the river from the bridge in the 14th Century. The bridge is best viewed at night where it provides amazing views across the illuminated city or early in the morning to catch the exquisite sunrise.

2) Dance the Night Away in a Nuclear Bunker 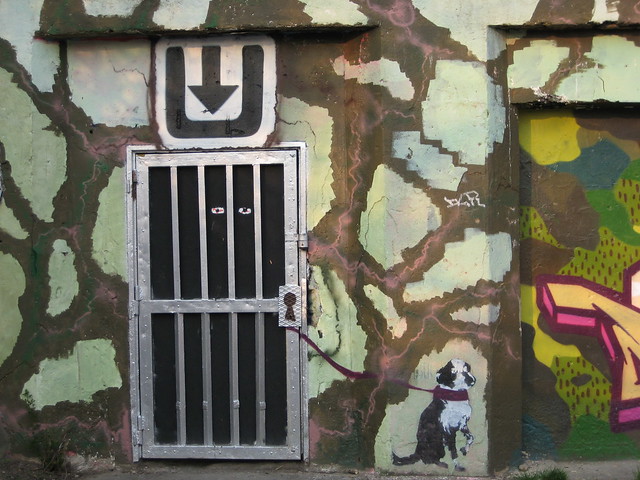 Bunkr Parukarka or the Parukarka Bunker is a former nuclear bunker from the Cold War Period that has now been transformed into one of the hippest spots in the city and attracts a hot young group looking to party underground. The bunker is set in a hillside and is now home to some of Prague’s best new musical talent and DJs who spin the night away in this unique space. The bunker also features several emergency exists for guests who are worried about safety precautions.

3) Escape the city with a trip to Kampa Island 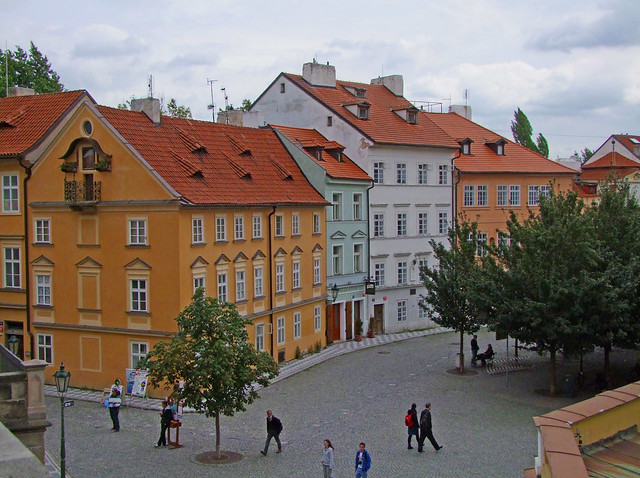 Kampa Island is an island that sits in the Vltava River and is another one of the awesome things to do in Prague. It is easily accessible to visitors via a small street that connect to Charles Bridge. The island houses Museum Kampa, a modern art gallery that specializes in showcasing Czech art work as well as collections of modern art from around the world. A popular feature of the museum is a huge sculpture of a chair that sits outside and can be viewed from the other side of the Vltava River due to its size. 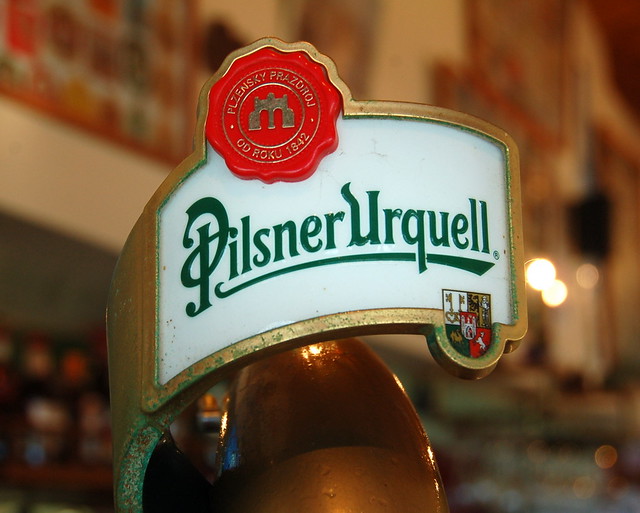 This Awesome Things to do in Prague list wouldn’t be complete with out a nod to Czech beer. A beer drinking culture that gave the world Pilsner beer, Prague is home to a host of beer halls that allow visitors to sample the famous brews in a traditional setting. Beer brewing dates back to the 12th Century when it was discovered that the Czech climate was perfect for producing hops used for making beer. There are a huge number of beer halls to choose from, some of which have their own micro-breweries on site, or take the form of traditional medieval taverns. If a full beer hall experience is not for you then you can still sample the Czech beer at a local pub where it is often said to be cheaper than water!

Not just a place for famous beer, you can also sample the local delights in Prague by trying some of the traditional food. Whether you prefer sweet or savory, there is something for everyone. Main courses often feature traditional delicacies such as potato soup, roast pork and pickled cabbage, and fried dumplings, or, if you fancy dessert, try the pancakes stuffed with jam, fruit, cream, or nuts. If you are after a snack there are lots of street food options available such as deep fried cheese or grilled sausages that can be bought from vendors as you stroll around the city. 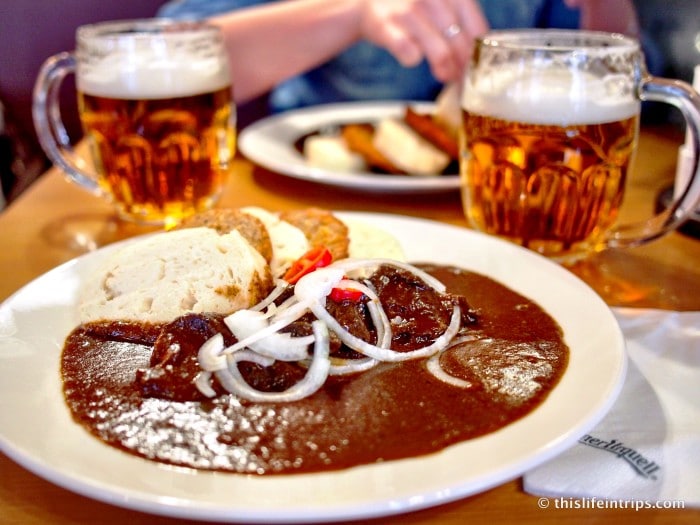 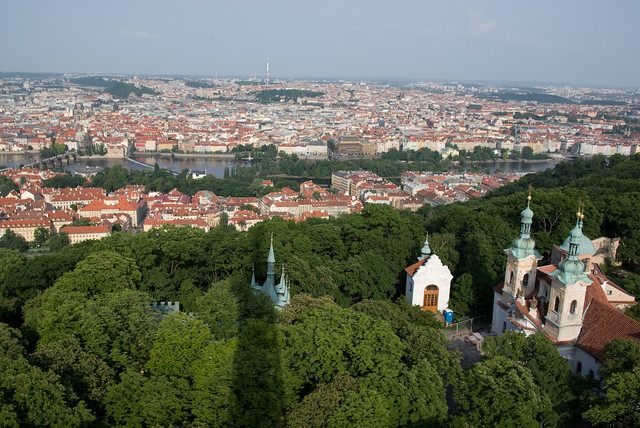 Head over to Petrin Hill and marvel at the Petrin Lookout Tower which stands at 63.5 meters tall and is modeled from a steel framework that has drawn comparisons to the Eiffel Tower in Paris. Built in 1891, the tower was used for transmission purposes and observation needs, and is now a favorite tourist attraction for visitors to Prague who can take in the views of the city from two observation decks. Visitors to Petrin Hill can choose between a 30 minute walk to the summit or can take a funicular for a more relaxed outing. The tower is not the only attraction at Petrin Hill however, visitors can also enjoy a mirror maze, the Church of St. Michael, and scenic gardens dotted around the summit.

7) Take in the history at Prague Castle 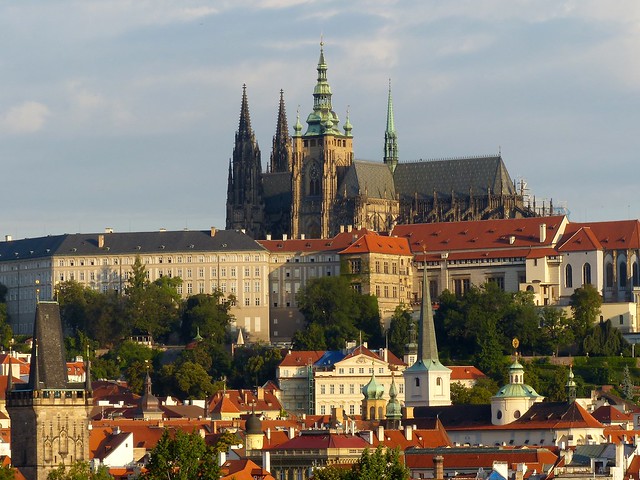 Having been founded in the 9th Century, Prague Castle has stood for over a hundred years, and occupies an area approximately the size of seven footballs pitches, making it the largest ancient castle in the world. Historically it was the home of former Czech rulers and political leaders and is actually part of a huge complex (one of the largest in the world) that consists of palaces, offices, churches, and gardens. Of note within the complex is the tomb of St John of Nepomuk which is cast in silver and finished with silver gilt. Visitors can wander around the complex at their leisure and soak in the history and the traditional architecture.

8) Spend an afternoon at the Old Town Square 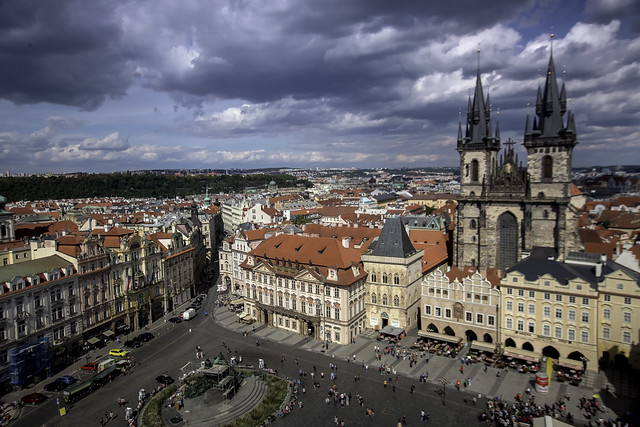 Another do not miss on this awesome Things to do in Prague list – the Old Town Square. Founded in the 12th Century, the Old Town Square is one of the most significant spots in Prague and is as lively in spirit today as it was in the past. The square itself features commemorative stones as well as the Prague meridian, the place where the noon shadow used to be cast and was used to measure time in the Czech Republic. The square is also overlooked by the Old Town Hall, the church of Our Lady before Týn, and the monument of Jan Hus, the Czech priest and philosopher. Visitors can also dine outside the many restaurants that line the square, and watch the street performances, painters, and food vendors that congregate daily.

Wenceslas Square, located in New Town in Prague takes its name from Saint Wenceslas, the patron saint of Bohemia, the historical name given to the territory. The square is famous for demonstrations and protests, annual festive celebrations, and other national and cultural events. It also belongs to a section of Prague known as the historic centre which is a UNESCO World Heritage Site. The National Museum Building stands at one end of the square and the northwest end touches the border between Old Town and New Town.

10) Enjoy the art at the National Gallery 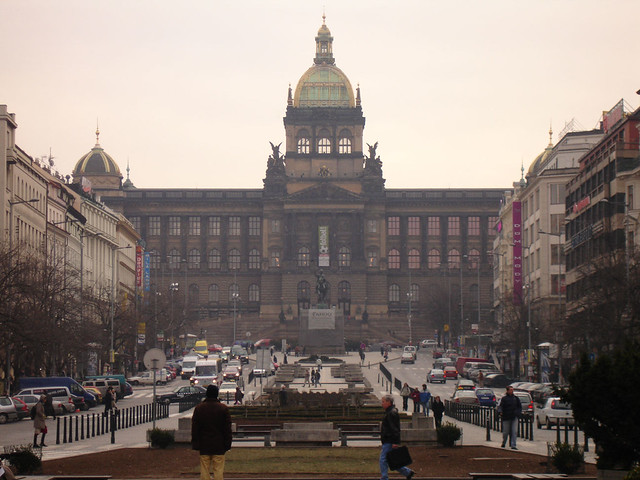 Last up on this awesome Things to do in Prague list is touring The National Gallery which houses the largest collection of Czech artwork in the world. The gallery is actually not confined to one place but is instead spread over several different historic sites around the city of Prague, and the largest is home to the National Gallery’s modern art collection. The National Gallery also includes international works by a host of famous artists such as Rodin, Picasso, Van Gough, Renoir, and many others, and visitors can also see paintings and sculptures from a wide range of both traditional and contemporary Czech and Slovak artists. Artwork from the National Gallery is also featured in the Convent of St Agnes of Bohemia and Schwarzenburg Place, to name but a few, so visitors can go on an art tour of Prague by visiting the different locations and art collections scattered around this beautiful and quirky city.

What say you?
Thoughts on these Awesome Things to do in Prague?
Let’s hear it!

10 Awesome Things to do in Prague has been brought to you by Jan Meeuwesen of www.thecrazytourist.com. If you are interested in contributing a guest post to This Life in Trips I would love to hear from you!